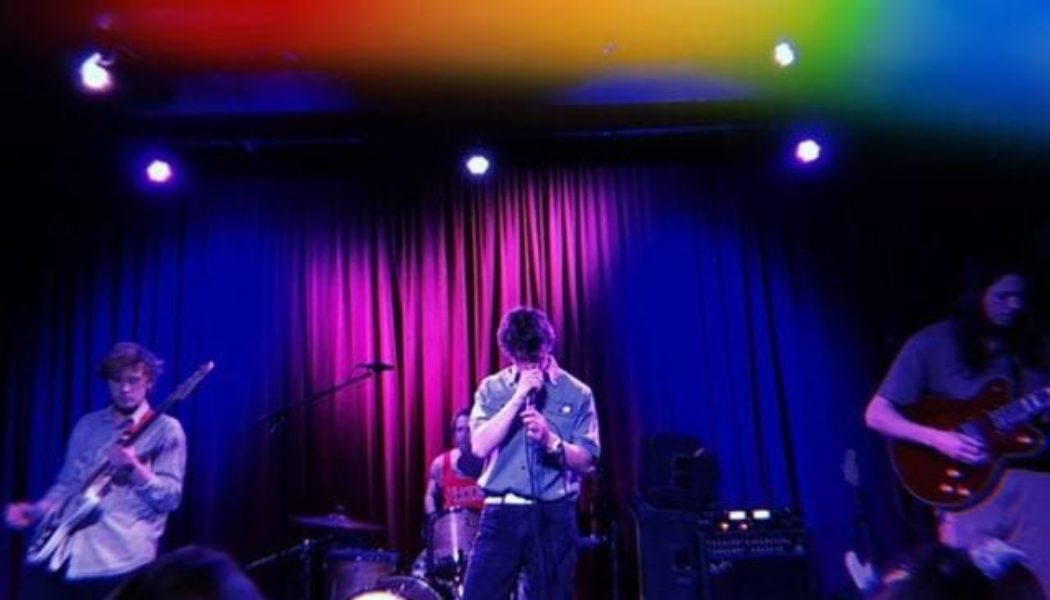 Isobel Abbott-Dethrow sat down with the Lizardtones in South City and spoke to its members, Jake, Evan, Dylan, and Mikey.

Isobel: How was the band formed? Is this the original lineup?

Dylan: We all started playing together in high school at different times. I knew Jake first and he was friends with Mikey. They both took band classes.

Jake: We used to play jazz band together all the time.

Mikey: I met Jake in second grade. We didn’t play music then but I’ve known him forever.

Dylan: We all go way back. We’ve been playing for a long time. I guess the current lineup of the Lizardtones, as it stands right now, was formed in 2016 after we moved to college for a year, then dropped out.

Isobel: When you create music, do the lyrics or melody drive the song?

Dylan: Definitely the melody, one hundred percent. The way we usually do songs, we have an idea of a little melody or jingle sometimes; we start with a demo of that and then we add other instruments on top of a big guitar. The vocals usually come last.

Mikey: Right now, it is pretty interesting because our practice space is at Lemp, which is just down the street. If we are all working that day, say if somebody has an idea, it is all on the computer there; if other people aren’t there, you can just go work on it and somebody else will find it later.

Dylan: It’s really cool; it’s all of us falling off each other. One person will have an idea for this guitar move or someone will write a bass line and then one of us will say, ‘Oh, this would be really great on top of that!’, ‘I have this idea that would work well with your idea.’

Evan: There’s a slicing up of songs going on. We fuse them together.

Isobel: Have you been on tour anywhere yet?

Jake: Not yet. We just got started in January.

Jake: Our first, official show was at Blueberry Hill in February.

Dylan: That was such a good show.

Isobel: Yeah, the crowd was going crazy that night.

Jake: There’s actually a review of that show. The guy who reviewed it saw all of the bands until the Slow Boys got kicked out and he left.

Mikey: A lot of people thought we cancelled…

Jake: Half of the crowd left after, but it was still a good time.

Evan: If you really want to count it, we did play at a graduation party in 2016 under a pavilion in a park.  They told us to turn it down, because we were too loud. It was very awkward.

Jake: I don’t think they knew what they were in for.

Dylan: We got sixty bucks that night.

Isobel: What are some of your best memories playing live so far?

Mikey: Definitely Blueberry Hill–it was just awesome in the energy you get to feel when there’s a stage and people.

Jake: I was a special kind of drunk that night–kind of losing it.

Evan: I really liked PorchFest when we played. Playing outside is really crazy.

Mikey: I got to be on a porch alone and the drums were surrounded by a rock thing. It was cool.

Isobel: What has been your favorite venue to play at in St. Louis?

Jake: The Slow Boys album release show was fun to put together. It was all people we’re friends with; I’ve been friends with the Ragstripes since I was fourteen or fifteen–we all have, basically. And the Ragstripes have been playing since then, too, so I’m not sure why they don’t gig as much as they should. But yeah, that show was awesome.

Mikey: They’re all so nice, the Slow Boys and the Ragstripes. We all got to hang out before and after the show.

Jake: There ended up being a big party at the apartment after.

Isobel: So if you could tour with any other local band, who would it be and why?

Jake: If I had to pick somebody, I really liked Jackie Presley. I saw them at LouFest at Foam… they are really cool. Max is on the guitar and he kills it. They have a single out right now. I like everybody in that band.

Dylan: Obviously, the Slow Boys(*). The Ragstripes, too.

Mikey: The Public is cool. Or Dracla (*); that band is interesting. They haven’t played in a little bit, but I work with the person who used to be the head guy. He dresses up as Dracula and he’s in character the whole time and he plays this really cool bass. It’s some indie rock and it’s good.

Isobel: Who are some of your musical influences?

Dylan: The biggest one of them all would be No Doubt. We are a big fan of Gwen Stefani and her work.

Evan: Tragic Kingdom is a perfect album. There is not a bad track on that album.

Mikey: I really like No Doubt and I got Tragic Kingdom from Goodwill one time. That was a great day.

Evan: Gwen’s the hero, for sure.

Jake: They are so underrated… they are one of the best bands.

Mikey: I think the Voidz are really cool and I like a lot of fusion jazz. I like metal, too.

Dylan: We like to think we have a collective taste. Possibly, maybe… we try.

Isobel: Whenever I go to your shows, I see that the crowd goes pretty crazy. What do you think contributes to their enthusiasm? Would it be your stage presence or the resonance of your music to the audience?

Evan: Dylan dances for them, that’s why.

Dylan: I think, more than anything else, it is that we like to make people feel comfortable and try to tear down that wall between us and them, like we are all here in the same bar having a good time and everyone is equal here, let’s all show ourselves. Let’s get down.

Jake: There is an issue at STL shows where people do not move. They just sit and watch. I remember we watched Sugar Candy Mountain at Foam not too long ago. Obviously, we were getting drunk so we were rowdy and dancing, having a good time, but nobody else was. The band was so good, though.

Evan: We got some really weird looks at that show from people coming in to see rock and roll.

Jake: No, it’s not, and if you go to Los Angeles for shows like that, everybody moves. It’s fantastic.

Isobel: What lessons did you learn from producing your EP, Maple Syrup Moments, and how did you apply those to your album, The Lizardtones? Did it go smoother or help the end result?

Dylan: It definitely did not go smoother. With Maple Syrup, we had a scarlet interface, a MacBook, and some guitars. It was basically, ‘Let’s just record this on a computer and it’ll be good enough.’ With the album, it was a lot of testing different things out, different effects and even recording techniques, just trying to see what worked and did not. It took us a lot longer to complete, but in the end, I think that was a good thing.

Evan: We did it in a stuffy, tiny room, where it was a hundred degrees.

Dylan: The conception of that album started when Evan and I spent a year recording guitars in a room half the size we’re in right now.

Mikey: You said somebody killed himself in there?

Jake: I said that; it’s all part of the urban legend of the Lemp family.

Dylan: Evan and I locked ourselves in that room for a year playing guitar and sweating because there was no air conditioning in there. We were trying to figure out how to write songs and record, basically.

Mikey: For me, there is a big difference between the EP and the album. When you put something out, especially when you are doing the next thing, you realize how hard it is to get the take that you’ll be happy with it a week later, or a year or five years later. I definitely remember not taking too long to do the EP, but I love the way it sounds. Yet it seems that with every single album now, you have to grind for the takes a lot more.

Evan: We definitely tried a lot harder on the album.

Jake: But we definitely clocked it all out in one day. We used most of the takes.

Mikey: Yeah, I did the drums for the album in one day. It was stressful.

Jake: We had to go back on a few tracks, but most of it was done in a day.

Evan: Mikey had a monster session.

Isobel: Do you have any plans for the next album? Have you started on any new material?

Dylan: There is another album in the works. As of right now, it is fifteen tracks long. We are thinking we will have to split it and make two separate releases. Or not…we’ll see. The bottom line is that there is so much more to release that we have written and are working on.

Evan: We have harddrives filled with demos.

Jake: You are going to be expecting music very soon, probably in the next couple of months.

Mikey: Definitely by the end of the year.