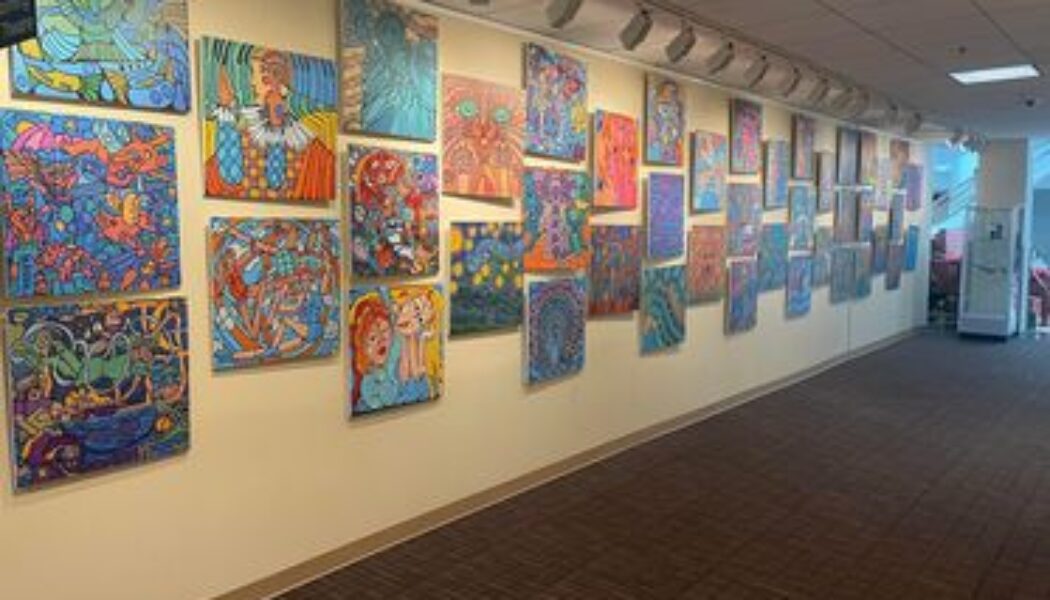 Soulard artist Rich Brooks, a former President of St Charles Arts Council and Cultural Arts Director for the city of St. Peters, has a tale of two cities both supporting and encouraging the arts.

Brooks has been painting outside his home on Sidney Street for more than 650 days creating “Art to Make You Smile”.

The city of O’Fallon had created a new art venue at City Hall as part of its arts programming. It’s Director, Martin Linson, invited Brooks to have its inaugural art show. Thus the collaboration began showing 16 of his large canvases to be displayed for months at a new City Hall gallery.

Then, with his love for the St Peters Cultural Art Center at City Hall (which he helped create 31 years ago) kicked in. He told administrator, Jill Tutt, about the O’Fallon show and asked about exhibiting there. She joyfully showed him space available. That show would be artistic prints involving nearly 50 printed paintings.

So “Art to Make You Smile”, a process involving nearly two years of painting outside in the elements at Brooks’s home in St Louis, came together. Brooks embarked on this adventure to keep art alive and visible while Covid raised it’s ugly head.

Two neighbors encouraged Brooks to paint pieces to be available for others to share. Hidden expenses included acrylic paint, 50, 4’x4′ canvases and hundreds of worn out brushes. Plus more than 1,000 hours in the elements.

And such, the fairytale began. Brooks gave up his estate sale work and became a full time artist. He didn’t think how he helped others become their dream as an arts administrator until It happened for him. At 72, he took his work seriously by making Art to Make You Smile. The title “Artist” is now the only title that makes him smile (other than being a dad and grandpa)..

From what I have heard, some people are going by St Peters first before 5 pm and coming to the 5-8 pm opening in O’Fallon on January 28th.

Note: Rich Brooks is also the Director of the Soulard Art Gallery. For more information, contact Rich Brooks at 314-629-2489