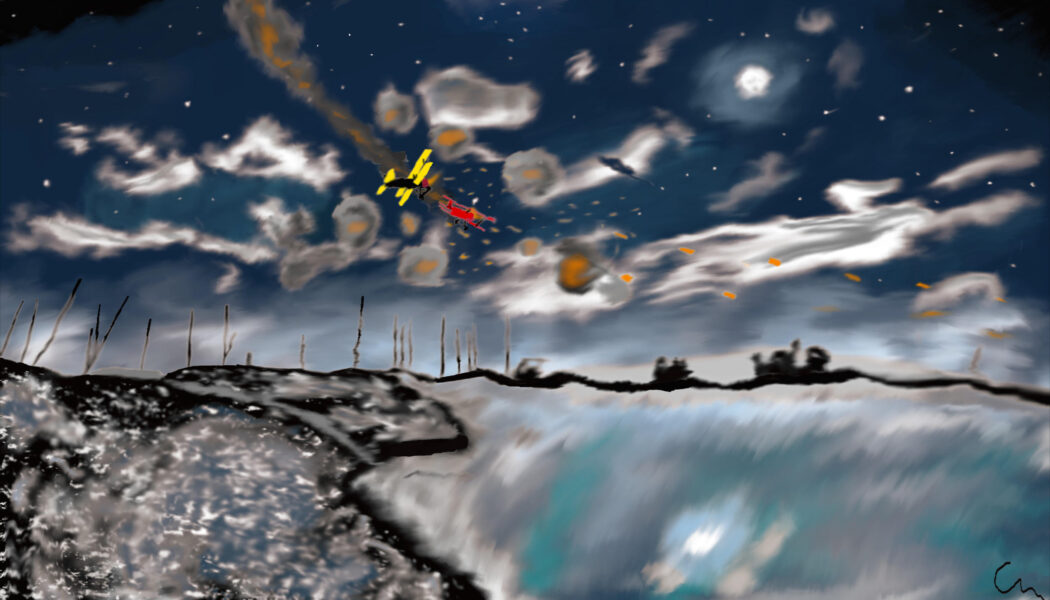 Creative Process: I found a wonderful picture online of a night sky.  I started with it and kept adding more and more things.  Members of the online community I am a part of were also helpful in giving me ideas for this painting.

Story: I have based this wonderful painting off of The Third Battle of Ypres in France, during WWI in 1917. l first started out putting the dark paint that would eventually make up the background of the sky. I made the moon and the glow surrounding it as well as the lightening for select parts of the sky. After that I added the surrounding clouds and stars whilst moving on and making the charred ground and destroyed trees on the left. The snow was done with some stippling and brushwork with my blending brush and palate knife in the virtual world. Then I did the destroyed houses on the right side of the painting. I also made a pond on the bottom right and blended in all the colors I had used thus far to make it look good. Shortly after I made the biplanes. The smoke and the fire coming from the red German biplane was added. Bullets were being shot from the yellow British biplane. Shells were coming from a base off canvas right to left.

Finishing touches were added to make sure everything was in tip-top shape!

Trivia: I originally was not going to add the biplanes! They just kind of popped into my head! I was going to add a zeppelin but found it too difficult to paint so I dropped the idea.

Submitted by Gesso Feature Artist Lois Holthaus: This is my 15 year old grandson Chauncey Fowler.  He used his virtual headgear to create the painting “The Final Moment”. It was printed on an Hp Printer. But it is an “oil painting” done in a virtual studio. He used virtual oils, paints and brushes on canvas. You can email Chauncey at: chauncey@usa.com.