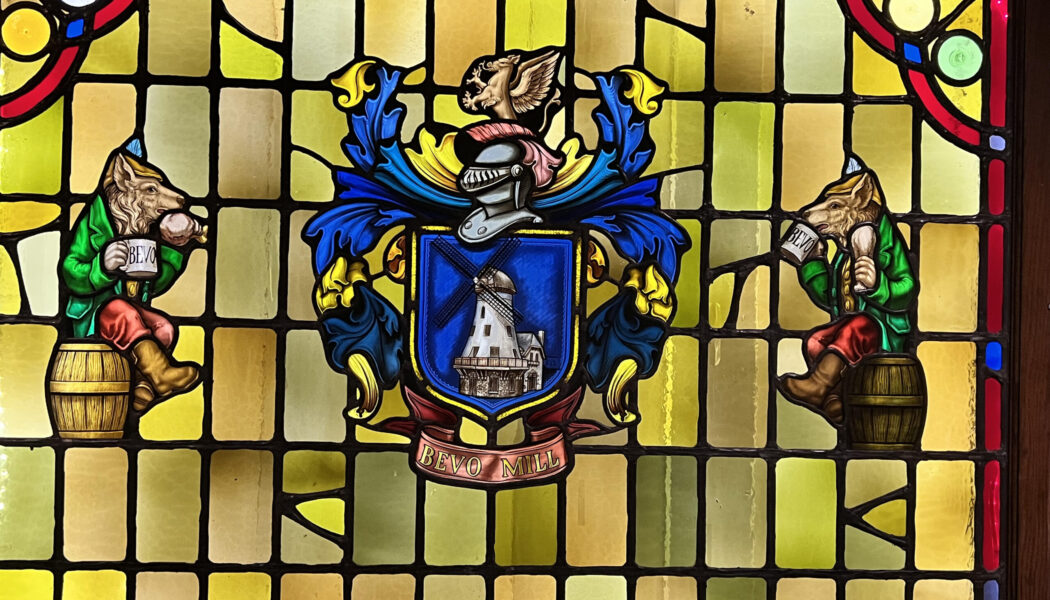 After a year filled with uncertainty, there is nothing more exhilarating than the thought of hitting the open road with your windows rolled down, your radio turned up, and your eyes set on the road ahead. Autumn is in full swing and what better time to take a drive. Having grown up in the city of Saint Louis, I have come to appreciate certain intersections with commanding architecture. Architects whose vision and imagination in the 19th and early 20th Centuries still decorate the city skyline, making any road adventure an interesting history lesson.

At the intersection of Arsenal and Broadway sits a curious fox with beer stein in hand. On the opposite corner of the same building, another little fox greets passersby with a lamb shank in his hand, clad in pants, boots, overcoat, and a feathered cap. These foxes sit on the façade of the AB brewing facility, much like gargoyles back in Medieval times sat on Gothic cathedrals. The Anheuser-Busch Brewery (now Anheuser-Busch InBev) is one of the world’s largest brewing companies today, and at the turn of the 20th Century had expanded its production producing nearly 1.6 million barrels of beer even back then. Until it all came crashing down when prohibition dealt a blow to not only this company, but nationwide breweries around 1920.  As a survival tactic, a near-beer product (non-alcoholic beer) named Bevo was made. (Bevo is the Bohemian/Slavic word for pivo or beer.) However, when I was younger, I had assumed Bevo was just the name for the foxes.  I always perceived them as curious and cute, and I rather enjoyed envisioning what they may have been thinking about all these years, watching us watching them on their perches above.

At the intersection of Gravois and Morgan Ford Rd sits another peculiar but fascinating structure.  A very large windmill.  Most Saint Louisans are familiar with the Bevo Mill, the family friendly restaurant built by the infamous Busch family in 1917. August Busch Sr. had his dream windmill constructed as a halfway point between his family residence, which was located at what is today called Grant’s Farm, and the Anheuser-Busch Brewery off of Arsenal and Broadway where those famous little foxes were soon to sit. At that time in history, this was a rather long commute by horse and buggy.  Once prohibition hit and beer could no longer be made or served, Bevo, the “all-year-round soft drink”, became the choice beverage patrons were offered with every sales pitch from waiters working at the Bevo Mill, hoping to exploit it and still make their customers happy at the same time with the famous German cuisine the restaurant soon became known for.

Busch had personally traveled to the Netherlands for design inspiration and built the 60 foot tall windmill tower structure using stones chosen from his own grounds at today’s Grant’s Farm. He built this one-of-a kind place on the site of what once used to be a blacksmith shop. The great arms of this stupendous structure spin rain or shine to this day, offering quite a stunning site to behold considering its location at what once was an obscure intersection in South City. Inside the windmill tower, apartment living quarters were built for the manager and later laundry facilities and storage space on the fourth floor were also thought through.  The octagonal mill room, once a private dining room, has beautiful porcelain tile murals of pastoral scenes with children, peacocks and other interesting scenery which at one time graced the restaurant of Tony Faust’s who was a family friend of the Busch family and later sold them to Busch for use at the Bevo Mill when his restaurant closed.

The main grand dining room has wooden ceiling beams, cheerful gnomes in the vaulted archways, beautiful paneling complete with a grand stone fireplace which is a real showstopper. The outside gardens, once complete with orchestras and carefree dancing, made the place have the reputation for being a “country club in the city”- (losttables.com). The downstairs later expanded and today offers a bar and large room for parties, complete with stain glass pictures and Dutch and German wall paintings. My grandparents, who happened to be of German ancestry, had their wedding dinner here in 1943.  My mother still has the menu, and I was impressed by the lobster, chicken, and German food selections offered then, not to mention what I wouldn’t give to have those inexpensive prices in this day and age! I am sure it was an impressionable and memorable time for them, as even today, you cannot help but feel the history and ethnic influence of a bygone era.

In 2009, the restaurant was donated to the city as the Busch family decided at that time to pursue other endeavors.  Pat and Carol Schuchard later purchased and renovated the space into Das Bevo and since 2017 it has served as a private venue space and restaurant for all to enjoy. But what about those foxes?

The real name of the fox is Reynard.  He became the face of Bevo, but was actually a character from a German, French, and Dutch fairy tale. He was a sly and witty, jest-like character, who always knew of great places to eat and drink. The concrete statues are actually about 10 feet in height and offer such an interesting tale integrated into the fabric of not only German American history, but Saint Louis history itself – although I must confess, he will always be “Bevo” to me. If you are looking for a place to kick back your heels and enjoy a real beer beverage for OktoBEERfest, or a near beer or soft drink and brat for Oktoberfest, look no further than South Saint Louis. With its unique historical charm, head to Das Bevo or the AB InBev Brewery itself and take a tour straight from the finishing cellars.  See these amazing intersections for yourself, while you soak in the season of fall and let your 2022 adventure begin!

Head to Dasbevo.com for more information and hours of operation