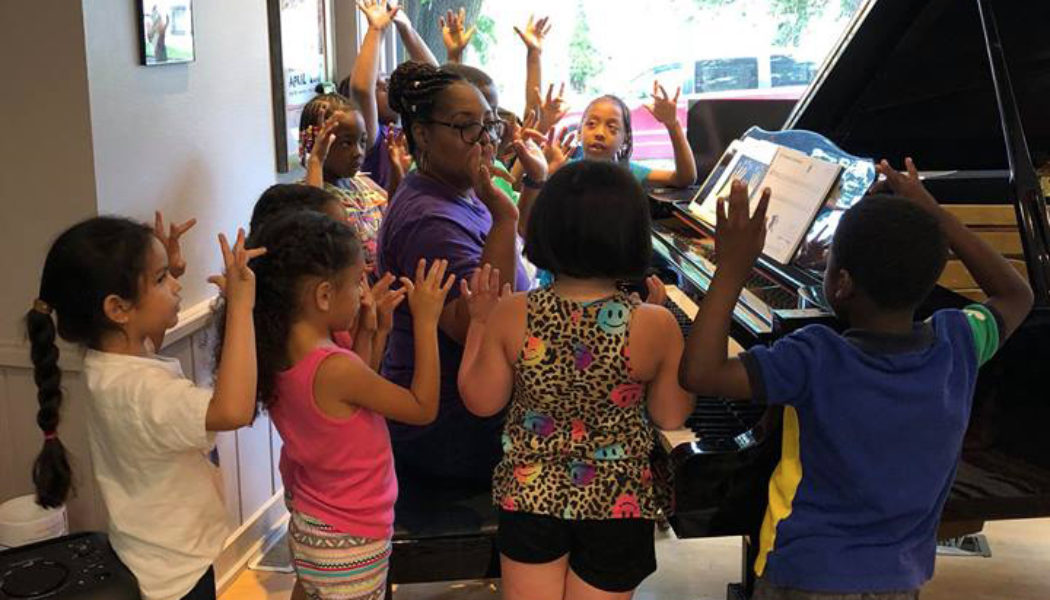 Evangeline Tubbs, my music teacher at Fairview Elementary School, in Columbus, Mississippi,
opened up a new world to me and my classmates. Not that we didn’t have music at home, but it was somewhat limited.

A couple of favorite radio stations blared in the kitchen and throughout the house while my sister’s LPs with Frankie Valley and “Hey, Hey Paula” competed for air space. I preferred Question Mark & the Mysterians, the Lemon Pipers, and Dave Clark 5.

Miss Tubbs was brilliant. She had a double Master’s in German and music education. Although we laughed and then complained about some of the things she made us do, she was one of the most effective teachers of my life.

Her piano skills were unmatched. Occasionally she told us to sit still, close our eyes, and listen to her play parts of arrangements by Chopin, Debussy, Mozart, and others. Miss Tubbs taught me music for three or four years, and I was able to identify any composer whom she had ever played.

One day she announced that she would be giving free pianos lessons on Saturday mornings in our school auditorium. Going to school on a Saturday kept most of my classmates from participating, but I went and she helped me work through a couple of the beginners’ books. Unfortunately, I switched over to guitar since my family couldn’t afford a piano for more practice.

Since Miss Tubbs’ classes and lessons, I developed a keen appreciation of all kinds of music.
I can’t overestimate its positive effects on my life.

Since December, 2012, Pianos for People (PFP) has been providing free access to music to those who may need it most. Tom and Jeanne Townsend founded this institution in honor of their son, Alex, an artist and musician, who died unexpectedly at the age of 21.
The first thing that caught my eye when I visited the facility was a baby grand piano which rests on a small stage in the front room window. That piano is a donation from Graham Nash, of Crosby, Stills, Nash & Young, who learned about PFP through founder, Tom Townsend. The piano was Graham Nash’s personal piano, and after learning of PFP’s mission, Nash shipped the piano in roadcases stamped with the words ‘Jackson Brown’ as the pair must have shared equipment when touring together.
The front room is accessible from the street and is a group lesson room that accommodates up to eight students. Further back are two private studios where more sophisticated students can hone their skills.
There’s also a lower level that serves as a waiting area for parents and a small library. There is no space wasted. It is inviting yet certainly not showy.

The organization is committed to breaking down barriers that prevent those from disadvantaged backgrounds from accessing the well-documented benefits of playing music. They do it through the piano, which has been the instrument that used to be the center of the American household. In some homes, it still is.
“We have a four-pillar program,” said Amy Seibert, Development Coordinator. “Free pianos for inspiration, free lessons for education, special events in the community, and summer piano camps for enrichment.”

Seibert, a musician with a long resume of accomplishments, coordinates the actual piano donations and delivery. As a Master teacher, Seibert’s resume assures that she is a crucial fit for Pianos for People.
I discovered that she has earned both a Bachelors (Butler University) and a Masters (University of Oklahoma) in piano pedagogy; is a former faculty member at Wayne State College and Oklahoma Baptist University, was a graduate student at the University of Oklahoma, and was an adjunct instructor at Southwestern Illinois College.
Seibert is a current member of the Suzuki Association of the Americas, member and former presenter for Music Teachers National Association, and instructor for MetroEast Music Together.
When I was visiting the office, I met Kayia Smith, the Piano School Director. Smith studied music at Southeast Missouri State University, Florissant Valley Community College, and at Lindenwood University. She taught music for seven years at Riverview Gardens School District and has been a church pianist for almost 30 years. Smith owned a music shop for nine years, serving 400+ students in piano, voice, guitar, and drums. She has been on the staff of PFP since 2014.

The Executive Director is Sheena Duncan, a native Canadian, who moved to St. Louis from Sydney, Australia, in 2013 and started participating with PFP a year later.

Duncan has had rich experiences in non-profit management with expertise in strategic planning, development, event production and financial management.

She negotiated several principal partnerships, raising over $20 million in major gifts and bequests, and has an outstanding track record for success in growing organizations.

Duncan is an accomplished pianist, having majored in music at the University of Toronto and is a four-time medalist for top marks with the Royal Conservatory of Music, Canada.

She moved to St. Louis from Sydney in 2013 and began participating with PFP a year later.

One of the main components of Pianos for People is the distribution of free pianos. This is timely since many school budget cuts significantly reduced or eliminated funding for the arts, including music education. Practicing the piano takes time, discipline, and patience. Unfortunately, it’s widely been replaced with social media and games, which distracts from the creative arts.

Pianos can be agents of change in a person’s life, opening doors to emotional and intellectual growth. Research repeatedly shows that playing a musical instrument can and does improve verbal memory, literacy, visual-spatial processing, and the understanding of mathematics. Furthermore, it has been shown to raise the IQ.

PFP has given away over 250 free, high-quality pianos. They find pianos, refurbish them in the “Piannex,” and then distribute an average of 40 a year throughout the St Louis area.

Without PFP, students such as Royce Martin, who was featured on NBC’s Sunday Today, probably wouldn’t have as great a musical story to tell. In the span of two years, Martin taught himself as much as he could about playing the piano but had to leave his home to practice elsewhere. When he received a piano, he also took advantage of the PFP free lessons program. After studying with Seibert and co-founder / board member, Pat Eastman, Royce earned an internship with Grammy Award winning, St. Louis based jazz pianist, Peter Martin. Because of the support of PFP, the Fox-Family Foundation, and other students, he now attends his dream school, Berklee College of Music in Boston.

PFP presently has over 130 students at its flagship studios on Cherokee Street in the Cherokee Arts District of St. Louis, and at least 60 additional students in the Ferguson (MO) satellite location. Free lessons serve as a vehicle for creativity, exploration, and the nurturing of students’ self-esteems.

They offer private and group lessons at both locations, including Music Production Workshop teaching students to use Garage Band, improvisation, theory workshops, and master-classes for the more sophisticated learners. The age range of students is from pre-school to senior adults.

A third component which makes PFP such an unusually successful program is the coordination of community events. Throughout the year PFP brings people together from the neighborhood and beyond for happenings that emphasize collaboration and performance.

Included are Super Theory Saturdays that reinforce what students have learned during the week. Piano Slams, which occur quarterly, introduce people of all ages to different styles of music, and provide the opportunity to play with a live blues band, led by founder, Tom Townsend, and an accomplished blues pianist in his own right.
They also host formal recitals and an annual adjudicated Music Festival.

If all of that were not enough, there are free summer camps that occur over a six-week period. These day camps provide a safe place for students to go while their parents are at work. Ensuring that youth are involved in positive activities is a high priority of PFP. There are offerings in Beginner Camps, Enrichment Camps, Turn Up Your Talent Multi-Disciplinary Camp, and a Digital Music Composition and Production Camp.

The many awards and special recognitions that Pianos for People has received include the 2017 St. Louis Arts Awards (Arts Innovator of the Year from the Arts & Education Council), national coverage on PEOPLE.COM, and on NBC’s Sunday Today (see weblink below).

They have been recognized by the Riverfront Times, the St. Louis Post-Dispatch, St. Louis Parent Magazine, and the Ladue News.

Emerson awarded PFP $10,000 which is the equivalent of securing, refurbishing, and placing 14 high-quality pianos. I could go on.

Its track record is unparalleled. In six short years, PFP has grown exponentially to the point where they are virtually busting out at its seams. The hundreds of students who have associated themselves with PFP speak highly of it and admit that without its services, much talent would be lost or wasted.

Here’s what a few people have said about the sense of community, quality of instruction, and long-term impact of the program.

“Pianos for People has created a joyful and exciting learning environment. The result –motivated students, enthusiastic about music instruction and activities…”

“An exceptional quality of instruction…where students are encouraged to learn, but not pushed so hard that they are turned off…”

“Pianos for People’s creative special events, emphasis on parent involvement and inviting spirit of inclusion has created a strong sense of community among families in the program…”

“Pianos for People is about much more than music education. It is about personal growth and character development, including confidence-building, self-discipline and sense of pride…

Thinking back to my experiences with Miss Tubbs in elementary school, I understand the power of having one person interested in what you’re doing. What Pianos for People offers is an entire staff of highly skilled individuals, each with his/her own gifts, who care about music and provide rich piano experiences for anyone who walks through their doors.

If I had had a Pianos for People in my life, perhaps I, too, might have become a virtuoso.

Amy Seibert contributed to this story.