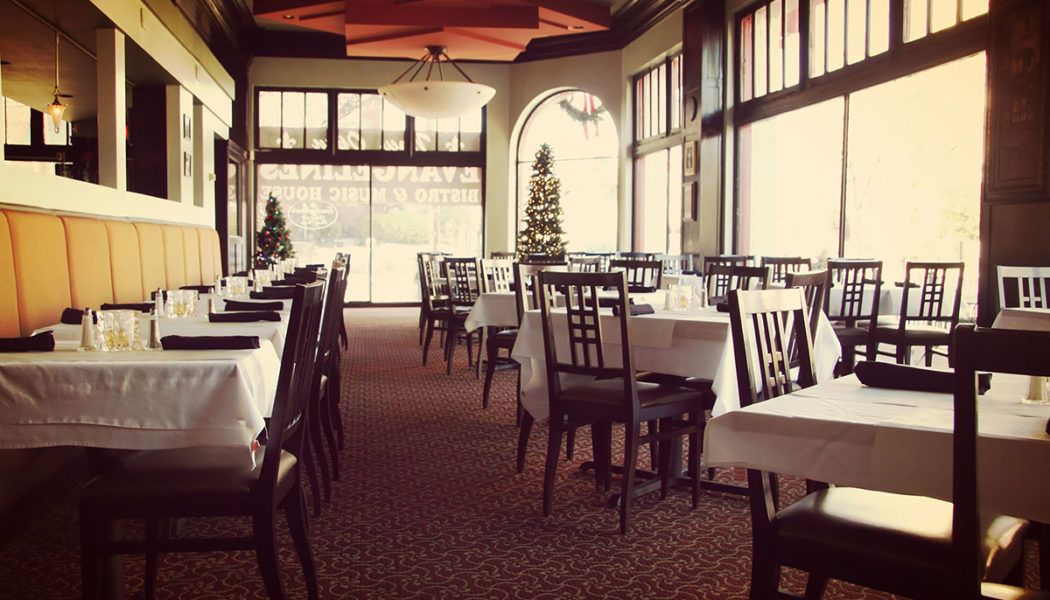 Henry Wadsworth Longfellow’s epic poem, “Evangeline,” is a 1400-word saga, tracing the steps of young Evangeline Bellefontaine across American landscapes to find her lost love, Gabriel Lajeunesse. The poem was written in 1847 and describes the imaginary search during the time of the Great Expulsion in Nova Scotia by the British of the Acadians.

At times, Evangeline is so close geographically to her lover that it’s ridiculous; however, neither knows the other’s whereabouts.
She settles in Philadelphia and, as an old woman, works as Sister of Mercy among the poor. While tending the sick and dying during an epidemic, Evangeline finds “Gabe” among the sick.
Sadly, he dies in her arms.
In essence “Evangeline” is a modern tragedy. Although school children are no longer required to read the poem, hundreds – maybe thousands – of venues throughout Louisiana’s parishes claim the name in their titles.

Located in the Central West End at 512 N. Euclid sits Evangeline’s Bistro & Music House. To tell you the truth, I can’t decide which is better – the restaurant portion or the music. I suppose it’s like the old ad for Certs: “It’s a breath mint…no, it’s a candy.” Boys and girls, it’s both!

Since I’m somewhat of a foodie, let me first take on the task of describing some of the food and drink items that caught my attention. Being from the New Orleans general area, I think I know good Cajun/Creole food. It’s in my genes.

Who doesn’t like a brunch, especially on the week-ends when you don’t have to go to work, you want to sleep in, and then have a late breakfast/early lunch? This is the place.
Saturday’s brunch does not come with a side of music. Sunday’s brunch does – Miss Jubliee, who, if you’ve been living under a rock, is a St. Louis fixture. She and her band members, the Humdingers, are not considered the official house band, but they might as well be.
The music is “jump blues” and old-time jazz, the kind that gets up under your collar and makes you want to holler.

As my grandma used to say, “Get on with it!” This is a partial list of items offered on the extensive menu:

If you can’t find something on that list that you like, then either your taste buds are dormant or you need medical attention. Add the sassy jazz notes by Miss Jubilee on Sunday mornings, and you just might be skipping church. That’s your call.

If you can’t attend one of the week-end brunches, take in a dinner, beginning with one of the following scrumptious openers:

Consider one of the classics:

And to top it all off:

My friend Beth and I shared an order of the Tabasco Butter Shrimp, which featured six to eight moderately large Gulf shrimp, perched on the side of the small oval casserole dish. The sauce was two shades lighter than pure Tabasco (the marvels of melted butter!),and creamy, as you’d expect. It was not a dish for those with tame pallets.

The Sazeracs were potent with the distinct taste of a rye whiskey, Peychauds bitters, a hint of sugar, and a rinse of absinthe. I wanted three but stuck with the one.
My crawfish etoufee was dark blonde, a nice roux with a pleasant nutty taste, and respectable pieces of crawfish crowded each other in the bowl. The small scoop of white rice in the center was necessary for it to qualify as etoufee. And it was garnished with a bright red boiled crawfish who I ate like a Cajun. (You might know what I mean.)
Beth tried the half order of Chicken Jambalaya. I got to taste it and wished I had ordered it rather than mine. Not really.
When Jake, our server, asked if we might want some dangerously delicious bread pudding, we declined, not because we have anything about bread pudding, but because we were s-t-u-f-f-e-d.
Boys and girls, this is more than an ambitious effort. It’s not New Orleans, but it’s as close as you can get without the hassle of getting there. You can bring your taste buds here and let them make their own decision.

Oh, did I fail to mention that Evangeline’s Bistro is also a music house? There’s music almost every night. How Don Bailey manages to orchestrate music acts every night of the week amazes me. The only night of the week that there is usually an absence of music is Sunday. But the walls of the building need a break after having soaked in all of that jazz by Miss Jubilee that morning.
Bailey lines up blues, jazz, American, and international groups from France, Australia, and Japan. The line-up is eclectic. For instance, the day that I was writing this article, Chris “Luppy” Swan was slated to perform Tuesday night, January 15th.
Swan’s contemporary inspiration, piano-driven music can be described as hip-hop with a message of positivity, recovery, and hope. He’s the founder of Soul Motivation Records. He’s a post-modern composer/performer and multi-media artist, working with the convergence of materials.
“His playing is bluesy, with a very light touch, nice pulse but with an approach that goes a little against the grain. Sometimes angular, sometimes hesitant or cautious…” (Steff Gjissels)
Also slated for that week was the Gary Coleman Jazz Trio, The Booti Grabber Delights with Leslie Sanazan, the Keith Moyer Quartet, and BurlyQ and Bubbly Review Burlesque Show (yes, burlesque!).
I’m not finished. Later in the month there was Dada Veda, a yoga monk from Urbana, Illinois, and Matt Cox, Paul Niehaus & Walter Greiner.
On January 25th Bob Baker hosted the Improv Comedy Cabaret, and on Monday nights there was Open Mic and jam sessions.
And the first Sunday of every month brought on the Jazz Troubadors, a regional group playing a wide variety from every era of America’s indigenous music.
That’s just a tasting of what Bailey offers at Evangeline’s in an average month. Just writing this makes me tired.

When I asked Baily who is the chef, he said, “I am.”
”Who helps you?” I asked.
“There are 31 on the staff with seven in the kitchen,” he said.
The fish and seafood is as fresh as you can get here in the Midwest; it didn’t seem flash frozen, as is the case with much of the seafood in this part of the country. The shrimp in our appetizer and the crawfish in my etoufee tasted like it was caught that morning.
Bailey is a jack-of-all trades. He shared with me that he is the person who does most of the maintenance.
“When something breaks in the kitchen and there’s a full house, you don’t have time to call a person to fix it. You have to learn to do those things yourself.”

In his spare time (ha) Bailey manages and operates a recording studio called Lonnie’s Farm (www.lonniesfarm.com). Opening a self-funded 8-track analog studio in an abandoned train station in 1991, Bailey has worked in live sound, mixing, tracking, and production with over 5000 (!) DIY, independent and professional bands.

Evangeline’s Bistro & Music House is worth checking out if you haven’t already. The menu is Cajun/Creole with twists and tweaks on some of the old New Orleans classic. Drinks are potent and the music is an eclectic line-up that offers something for everyone. Check out the website and see for yourself.
And as far as I’m concerned, Don Bailey should be dubbed Renaissance Man, with his wide range of skills – culinary, management, maintenance, and who knows what else. The man’s energy level leaves me wondering what happened to mine.
I think Bailey, like Evangeline from days past, has found his love, but he didn’t have to wait until the end of his life. He’s doing it now.