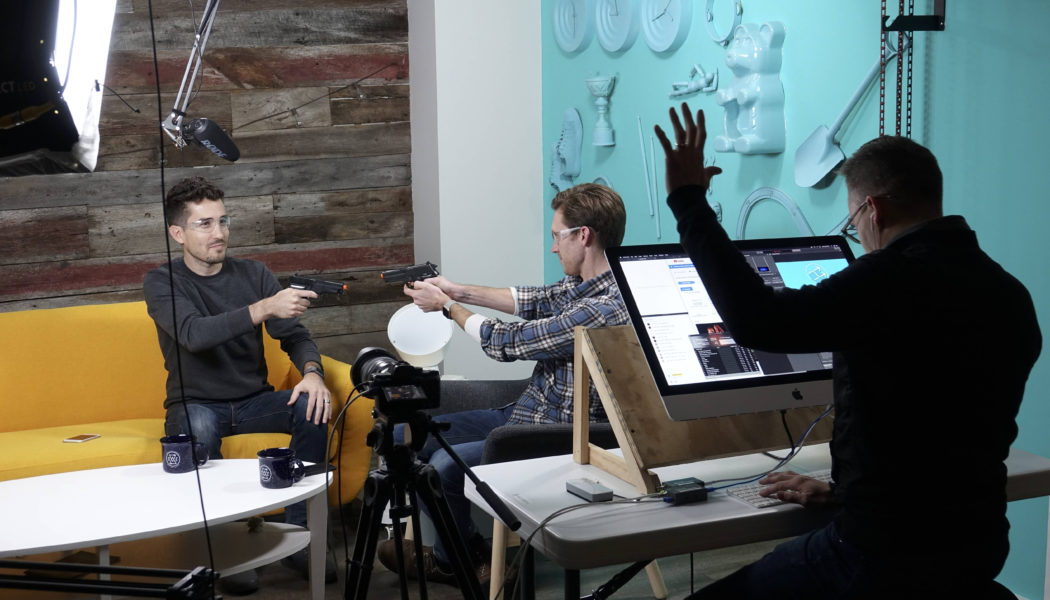 How many views do you have on your YouTube channel?  Hundreds?  Thousands?  What if I told that three guys from Belleville have helped a local business get over four BILLION views?

That’s no typo: four billion views, as in half the population of planet Earth.  4,640,792,375 to be exact.  How did Vat19, a local toy and novelty gift wholesaler, end up with more views than ABC News, Comedy Central, and Justin Timberlake’s VEVO channel?

“When we were kids, we’d just make silly videos together for fun, so it’s like we never stopped doing that,” Gula explained.

Lots of people claim to have fun at work, but believe me, you don’t have fun like these guys do.  Their main job is promoting the “curiously awesome gifts” for sale on Vat19.com, but instead of making run-of-the-mill product videos, they push the envelope further.  WAY further.

For example, to promote a product called Liquid Glass Thinking Putty, which is a sort of crystal clear oobleck that is sold in little tins of 1/5 pound each, they got five hundred POUNDS of the stuff, poured it in a bathtub, and then made Joey (“the cute one” as Jon and Danny describe him) lay in it to see what happened.  He slowly sank and got very stuck—and the YouTube video of it received 64 Million views.

To promote Orbeez Spitballs (little tapioca-sized beads that swell up to the size of marbles when immersed in water), the Vat19 team filled a pool with ten million spitballs—and then dove into it and tried to swim.  That video has 23 million views.

The promotions vary with the products, but one of their most frequent (and most entertaining) techniques is masochistically subjecting themselves to all sorts of hilarious abuses in the name of product promotion.  They eat lollipops made with Carolina Reaper peppers (the hottest on earth).  They drink their own pee through an ingenious portable water filter called the Lifestraw.  They have huge battles with chalk bombs that leave everyone looking like survivors of a Hindu Holi ceremony.

Another stroke of marketing genius the boys came up with is making original music videos about the products they are selling, complete with amazing catchy melodies they write themselves.  They’ve been doing this a long time: when they were in high school and they were assigned a written paper about Julius Caesar, they decided to write a song instead, and the resulting video was a huge hit, even with their teacher.  “I don’t remember anything about that play, but I still remember the lines in our song.  I realized then that music was really an effective teaching tool.”

This was the same strategy Jon Stamm used to take Vat19’s YouTube channel from ordinary to unbelievable.  “I asked my boss if, instead of making a typical video for the product, we could do a music video instead.  It turned out to be really popular, so we kept doing it.”  For good reason: the music videos are among the most popular videos on the channel.  Check out the one they did for the 26 Pound Gummy Bear for example—28 million people already have.

It’s not like these guys are just marketing geniuses pretending to be musicians—they really are musicians, and were long before Vat 19.  Jon, Danny, Joey (and Joey’s cousin Jeff, who still helps in the studio part time) formed a band called For the Moment when they were still in middle school.  The band was eventually renamed Redding, and the four boys never stopped hanging out together.  Jon, Joey, and Danny all studied music together at Southwestern Illinois College in Belleville, and stayed together while earning degrees in Media Production at Greenville College.

I remember watching Redding play at the Ground Floor in Belleville, back when the venue was an all-ages coffee shop.  It was like seeing N Sync in concert—not because of the music, but because of the fans.  They always drew a huge crowd—mostly teenage girls, who would crowd the dance floor swooning at the boys in the band.  Though they refer to Joey as “the cute one,” the truth is they are all impossibly cute and still boyish, even though they have now moved into their 30s, into parenthood, and successful careers.

Growing out of their long friendship, their band, and their success at Vat 19 is Redding Creative, their own media production company now based in Belleville.  On a recent night (after their day-jobs at Vat 19), I met up with them in their studio on the fourth floor of a former bank building.  It is a small space, just two rooms, but cleverly designed to provide several different sets and shooting backgrounds.  The studio was outfitted with sharp, state of the art video equipment like an automated slider dolly, color changing LED lights, and high-end studio microphones.  But it wasn’t always like that.  Jon explained how they got started.

“Someone we know offered us the space for free, so we just started cold calling companies and offering our services.  We told them we had a studio, but we actually didn’t have anything but DSLRs and some cheap softboxes, so when we finally got some offers, we said we need half the payment up front, and that’s how we got all this stuff.”

Then, as if worried how that might sound, he went on.  “It wasn’t a lie, exactly.  We knew we would give them a good video.  We just didn’t tell them what we had when we started.”

The videos were good, and the clients were happy.  “That contract paid for all this, and is still keeping the lights on.”

Now that they have their own space and their own brand, they are beginning to branch out into other kinds of services:  Making high quality vlogs and web series, like their weekly entertainment talk show, Randomonium.  Giving speaking engagements about their success.  And encouraging others in the community to join them.

“I see three pillars to our business,” Stamm explained.  “Client work, like the videos we made for Mattel and Brookstone, our own original content, like Randomonium, and creator development.  We want to host meetups for other content creators in the area.  People always talk about wanting to move to California to work in the industry, but I always tell them that they don’t have to move.  There are so many advantages to working here, not the least of which is how affordable it is.”

I hung around and watched the boys shoot an episode of Randomonium, which, as the name suggests, focuses on many different random topics.  This week’s topic: Is Die Hard a Christmas Movie?  The episode began with both boys screaming. “Die Hard IS a Christmas Movie!” “Die Hard is NOT a Christmas Movie!”  But then it moved quickly into a humorous and surprisingly erudite debate about what elements a movie must have to be considered part of the Christmas movie genre.  With almost no advanced preparation (other than the fact that Jon and Danny have been having this actual argument for years) their delivery on air was unbelievably articulate, funny, you might even say polished.

One of the most astonishing things about Randomonium (and Vat 19’s) online success is that it happened without one iota of that staple of advertising: sex.   Look at all the videos on Vat 19 and you won’t see a single obligatory cleavage shot.  In fact, even though the sites have a fair amount of juvenile, Jackass-style stunts (blowing stuff up, attaching a piñata to a drone and smashing it with a baseball bat, eating real worms to compare them to gummy worms), nevertheless, there is something clean, even wholesome about their work.

“Yeah.  That’s really important to us,” Danny explains.  “We hear from parents all the time who tell us, I see my kids watching YouTube and I worry about them, but then I see that they are watching Vat 19, and I relax because I know they won’t see anything they shouldn’t see.”

If you think that this is due to mellowing with age, you would be wrong.  Even in middle school and the early days of their band, there has always been something wholesome about these guys.  It may come as no surprise that they are all devoted family men, practicing Christians, and most of the music they make these days (when not singing about giant gummy bears) is playing in the band at church.

“I feel so fortunate that I can make a living having fun with my best friends,” Jon said before sitting down to record a podcast with Danny.  “How many people get to do that?

Gesso staff writer Dan Cross teaches film and directs the film program at Southwestern Illinois College in Belleville.  He was “imbedded” with the film crew of Belleville during their work in the Metro East and served as set photographer. He also worked on other local films, including the recent feature “Go South for Animal” Index, on which he served as editor, assistant director, and co-director of photography.  Cross also plays in two local bands, Earthsol and the Vinyl Frontier.

What: Randomonium (and Vat 19)
Where: On Line and in Belleville, IL
When: Twenty-four hours / Seven days a week (on line)
How: https://www.reddingcreative.com/
Web: Vat19.com