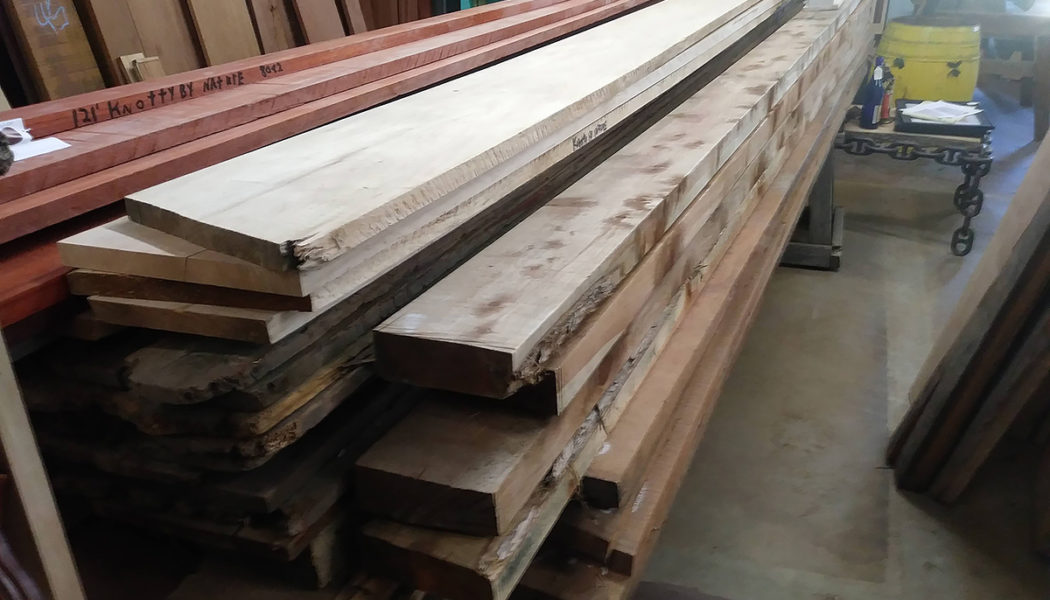 One sunny summer day a few years ago, my friend and fellow poet, Beth Gordon, and I took a casual drive down the Great River Road from Alton to Grafton (IL). It was a well-deserved outing to break up our week-end of writing and editing poems.
We had plenty of company that day. Bikers were out, their do-rags vibrating in the wind as they passed us in small clusters. We figured that Grafton would be bustling. And it was.
We did all the normal things that one does in Grafton – having a few adult beverages, eating, and rummaging through the shops, walking along the shore line of the Mighty Mississippi. There was one shop in particular that I had previously visited, and I wanted Beth to see it.

New friends at Knotty by Nature

Knotty by Nature (15 East Main St.) is an eclectic warehouse of wood, wooden products, art, and collectibles. Some of the items are purely practical, such as beautifully designed chopping blocks, desks, and tables. Other items include whimsical and/or odd items that might make you laugh or ask, “What the heck would I do with this?” You will also see long, thick-cut slabs of some of the most beautiful wood, which stand like giant soldiers both inside and outside of the shop.
At any time, Dan Bechtold, owner, has about 30 vendors who sell their products in his store. He also takes orders for custom wood-cutting jobs, and delivers them. The refreshing smell of wood lingers and attaches to your clothes.
After Beth and I meandered through the various sections of the shop, we noticed that most of the Adirondack-style rocking chairs were occupied. Bechtold invited us to join them. There were libations and stories, which was perfect since I happen to be of Irish descent.
Bechtold introduced himself and his partner in crime, Cathy Ferguson. To make a potentially long story short, we stayed a few hours and left having made new friends. Did it take us long to return to Knotty by Nature? No. Like the next week.

A brief history of Knotty by Nature

Bechtold bought his first saw mill in 1978. It was a circular mill with a 100-horse-drawn belt. “There were always issues with equipment,” he said. Later he purchased a band saw and a wood-miser saw in 1995.
“It got easier to cut more and more,” he said. “I was beginning to gain a good reputation.”
In 2016 he moved from his hometown, Dow, Illinois, into the present location at 15 East Main Street in Grafton.
“On a typical (good weather) day, 400-500 people walk through the shop. Business is good,” he said.
It’s a fine example of a hobby becoming an obsession, which becomes a solid business.

You CAN find exceptional help!

A business doesn’t run itself. Even if you’re the most capable person to make a business profitable, you need help. With heavy walk-in traffic at Knotty by Nature, there is no way one person can deliver in-store customer service, take orders over the phone, check people out, and be accountable to about 30 vendors who have their products for sale in the store.
On October 10, 2016, Cathy Ferguson walked into the shop to help make Bechtold’s business
run as smoothly as a well-oiled door hinge.
Ferguson had done home daycare for 15 years and worked at a pre-school when her sister was deployed to Qatar. “Aunt Cathy” became her nephew’s temporary mother for a year.
Upon her return to the States, Cathy’s sister was assigned to a base in Arizona. Her son moved out, leaving Cathy an empty-nester.
A friend told her about a job opening at the local wood shop, so she applied in person and was hired that day! The rest is history.

On our third or fourth visit, Beth asked Dan what kind of events they had hosted. There had been acoustic music and some jams. (What? No poetry readings?) Beth asked if they would consider hosting a Poetry&Wine night.
“Sure,” said Dan. “That might work.”
“Let’s do it,” said Cathy.
So we four made plans for the first installment of Poetry&Wine for October 10, 2017, one year from the date Cathy was hired. It was a Friday night at 6:00 PM. Since we’d never done this, we didn’t know exactly how long the session should last, or whether we’d have an audience. It was a gamble.
Beth and I prepared our program. We decided to alternate reading, each presenting four or five poems, followed by an intermission, and then another round.
Meanwhile, Dan and Cathy moved chairs and tables to make sure that everyone had a place to sit. It was tricky since we didn’t have a clue how many to expect. They made room for 25-30, and I remember that a few people brought in lawn chairs from the trunks of their vehicles. It was cozy.
Cathy polished the wine glasses and took care of several other minor logistics.

When many people hear the word “poetry,” they back away, shrug, or make a face. Perhaps their encounters of poetry in school were unpleasant. Maybe their college English instructors held them accountable for analyzing poetry that was “too academic,” dull, or unengaging.
“It’s not like that,” says Ferguson to people she invites to the readings.
And it’s true. Although Gordon’s poetry addresses death, dying, and other catastrophic events, it also flirts with the underbelly of love. By contrast, my poetry is about everyday observations that all of us see. The regulars seem to like it when I breathe life into a “white-trash nekkid” character, injecting humor into almost every poem.
Guest readers such as Lisa Tellor-Kelley, a breast cancer survivor from Highland, have titillated the audience with mild erotica, sensual expressions of love and fantasy. And leave it to Dave Ambrose from Carlinville to paint word pictures of boys raised in a funeral home, toting cadavers in a red wagon in the hot sun.
Dan Jacoby from Hagaman, IL, co-editor from Red Fez magazine, has read. So has C.T. Salazar, a young, strong voice from my hometown, Columbus, Mississippi. Sandra Kohlbrecher from Marine, IL, and Arlene Bridges from Bunker Hill, IL, have read short selections of prose, adding a sweet twist to the poetry.

As the name “Poetry&Wine” implies, we provide wines, cheese (five or six kinds tastefully presented on a cheese board), and something more substantial such as chicken salad and fruit. Without asking, friends started bringing food to the table such as sweets – brownies with chili pepper flakes, homemade cookies, a pie or two.

Back to the story…

The weather was perfect that first evening. Several Grafton visitors who had walked to Knotty by Nature ventured in, unaware of the event. They were pleasantly surprised and joined in the fun. All told, we had an audience of about 35! And Dan and Cathy made some unexpected sales.
A few people told us later that they didn’t have time to drive to Grafton after they got off work that Friday, so we moved the event to Saturday evenings to alleviate that problem.
We scheduled our next reading two months later in early December, knowing that Christmas events might mean a lower number. Once again, and with a cozy, glowing fireplace, 35-40 individuals attended our “casual culture event on the river.”
Poetry&Wine is not an open mic event. We prefer to orchestrate a set program to insure that we manage the time.

“It’s a nice evening,” said John Zeiser, a regular attendee from Highland. “I like to get there early to get a good seat. And another good thing is that it doesn’t eat up the entire evening.”
Zeiser is right. A typical session lasts until about 8:00, but Dan and Cathy urge participants to hang around after the performance to mingle.
Two other regulars at Poetry&Wine are Sue and Marv Asher from Highland.
“Poetry&Wine night at Knotty by Nature is a nice way to spend an evening. The venue can’t be beat, and the trip along the river is a pleasant getaway. Listening to the poetry is fun and an interesting way to gain insight into the authors’ heads,” said Sue.
Two more regulars, Dan and Sandi Sweeney, also from Highland, commented,
“What a special experience! Listening to eclectic poems in a cozy atmosphere…we love gathering in such a unique shop to listen to poetry that touches your emotions and tickles your funny bone…This is not your usual poetry reading. It’s an unexpected experience that can light up your imagination.”
Dan Sweeney went on to say, “These poetry readings have it all. An eclectic mix of poems, a glass of wine, a cozy fireplace – all in a unique shop on the river. These evenings are a treat. How much better can it get?”
Kathy Biver and Donna Marshall are regulars who drive from St. Louis. They said that they hate it when they can’t come.
Bob Stuckey said, “JD and Beth are talented poets and wordsmiths. They write from the heart and compel the listeners to clear the daily noise and static that assaults our ears. Sometimes whimsical, sometimes tragic, their words bring us together like Grandma’s old quilt and envelope the listeners…many thanks to Dan and Cathy for their hospitality and the opportunity to come in and warm one’s mind and body…”
Sandy and Al Thyer drive from Carlinville.
“There’s nothing like the smell of newly milled wood mingling with a cozy fire and poetry,” said Sandy. And I’ve learned that Al ‘ain’t going anywhere’ unless it’s worth it.”

I can’t wait. When’s the next installment?

The next session is scheduled for Saturday evening at 6:00 on April 6th. Mark your calendar now and look for updates on Facebook. There is never an admission. It is certainly not necessary to bring a snack. But we would never turn it down. We always have plenty.