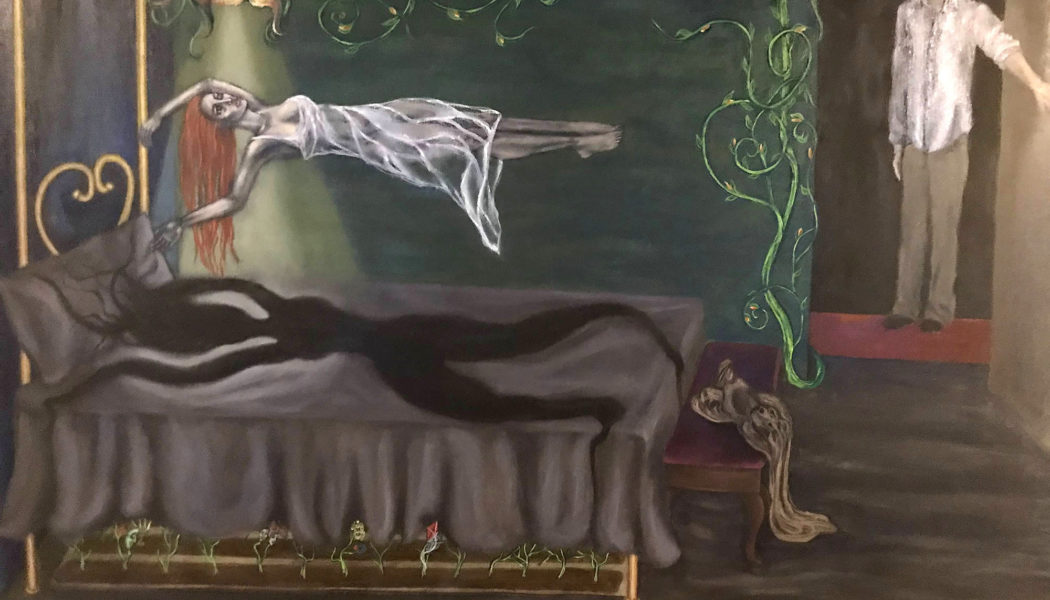 I had the privilege to meet local artist Tracey Ippolito at the opening of her art exhibit at Germania Brew Haus in Alton. It was a warm, May evening. I was amazed at the sheer volume of her vibrant paintings as every wall in the building was graced with her work. And then there was the comfort and ease with which Tracey spoke to me about her work – and about how her work was a key to her physical and mental health.

Like so many / most / all of us, Tracey Ippolito is subject to mental and emotional issues. I was amazed and impressed with how openly she discussed these issues and how they were reflected in her artwork. How her artwork was key to her successful dealing with doctors and medications and hospitalizations. And how all this combined showed up as such a “normal” way of life.

Tracey’s type of experience so often lives masked in the shadows. Tracey’s life model is to embrace her realities and to develop them into a philosophy and a portfolio of work that bridges these difficulties and creates space for the so-many-of-the-rest-of-us that struggle to potentially profit from her experience. I asked Tracey if she would be willing to share her story for the world to see here in print. Her answer was yes and her story is as follows:

Out of the Shadows

For someone with a mind strained to nothing, creation is everything.  I am an artist, and more importantly, a painter.

When I start a painting, that is the moment I am born, both again and for the very first time. For all that works against me, my unquiet mind, fearful emotions and general confusion, they all go blank as the pure white of canvas.  That’s where I start my worlds and the windows into then.

Sometimes an idea comes only in the act of moving brush on canvas. It’s only when I’ve finished, do I finally sit back and see that I’ve told myself a story, something that counts. Other times, I get an instantaneous flash of a complete work in my mind. At first not understanding them, but by making small cumulative discoveries along the way, I’m led to yet another world. Another story. Something that means something.

Yet, the journey to a comfortable chair with art supplies around me in a nice home with a hopeful future is absolutely nothing short of a trip down the rabbit hole. One fraught perhaps more with questions than answers.

I knew that my mind was different for the first time when I was five.  I looked out the window at my daycare center and saw three-dimensionally for the first time. Sounds were crisper, I could think clearly, even notice the feel of the air on my skin.  I woke up that day, but went right back to sleep. It was discovering painting a few years later that saved me from my fear and confusion.  It told me what my life would be about and that I would use myself as a medium for my future art.  That was a great comfort and an immense well of hope.

Thus ensued a lifetime of psychiatrists, hospitals and diagnoses. Every doctor I saw had a different theory on what was ‘wrong’ with me and it was never just one thing. I eventually found out that dissociation, the sense of unreality and non-self was the “sleep”.  The long sleep I’ve always had where I am ever removed from the world. Usually, this is a defense mechanism brought on by overwhelming abuse, but I couldn’t remember anything like that. I still can’t.

Despite the vast choices between possible diagnoses, there had never been any form of psychosis. That all changed the day, when as a young adult, I decided to have a baby.

The pregnancy went as well as one possibly can. The birth was natural and the baby healthy.  It was what began post partum. I began to see inanimate objects move, hear voices whispering in my ears and mentally constructing these interconnected paranoid conspiracies. When it all got to be too much, I finally went to a new psychiatrist and left with a diagnosis of schizoaffective disorder. A condition both of mood and psychosis, a dormant condition likely triggered by the trauma of giving birth. I was given medication and started feeling better.

Unfortunately, I was discouraged from taking my medicine by a bad influence at the time because it supposedly made me “weak”. I foolishly tried to follow this rhetoric and the ensuing resurgence of symptoms at last led me to believe I was psychic. The voices I heard, spirits, the dreamlike state I was in was suddenly a skill. I started my meditations (listening to the voices in my head) and writing. Writing and writing. Filling book after book with insane revelations that became like maps to me, trying to lead me to the treasures known as truth.

It was following one such map that brought the fantasy crashing down. It all led nowhere. Absolutely nowhere. I hit the brick wall known as irrefutable reality and I lost everything. A mind not just blank, but black. Then I was back in the hospital.

Slowly and carefully, one fact at a time seeped into my brain until I felt some strange sense of identity and reality. The world was breathtaking. Beautiful. There was so much good and I could see the importance of every molecule I’d ever missed. My mind was clear. Whatever was wrong with me, I’d integrated from it.  Recovered.

That period of time was quite brief unfortunately. I went back to sleep about a week later, but it has always since sustained me. A mind can only be so broken before something new is born. For me, that was my universalism. My own kind of art which was now my responsibility to put out into the world.  This universalist art would be a recipe for all others to look not just at, but through my paintings and receive all the visual information necessary to achieve the same cathartic integration I once had.  To have a personal experience through my worlds.

Over time I’d continue to stay in treatment, no doctor ever truly discovering my full condition, but I’d let it go. To this day, I am privy to strange thoughts and symptoms, despite medications, but now I channel them fully into my work.  It was being a parent and having purposeful art that saved me. The importance of caring for my son eclipsed the obsessions with the truth. Some things are just that important.

I continue to work on my universalist body of work and its accompanying proposed book and am nearing completion. After all I’ve been through, I now find myself in a supportive relationship as I am welcomed into a new family, home and community.

I am dedicated to bringing something of the worlds I’ve found back to others.  I can only hope that people can look into my work and find a piece of themselves through me. To realize what I did; someone else out there has lived as you’ve lived, felt as you’ve felt and to know that it’s real. We can all connect to each other through these precious things we call expressions, we can learn to live louder and no matter what, we can keep going.

To see more about Tracey and her work, visit:

Meet Tracey at the Gesso Magazine Demonstration Tent at Midwest Salute To The Arts in Fairview Heights, Illinois on August 23, 24 & 25.