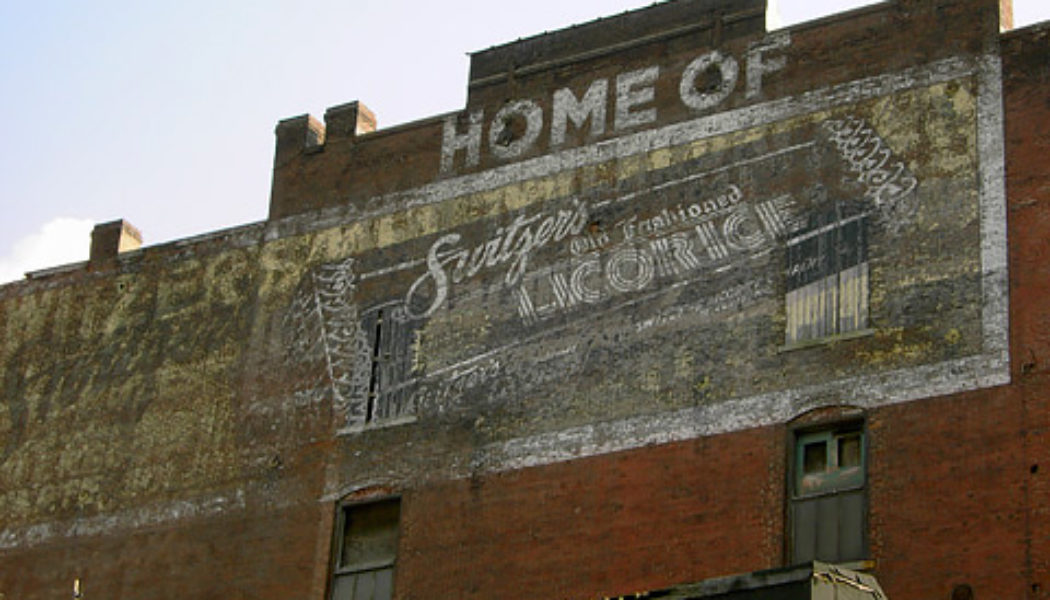 As we “spring” forward – turning our clocks ahead one hour, anticipating with excitement the warmer weather and longer hours of daylight, I often think of the many traditions which make this season so memorable.  From spring cleaning to spring break, to Saint Patrick’s Day parades, and the holiday of Easter, nothing makes the holidays and traditions of spring sweeter for many of us than candy.

Saint Louis has a rich history of candy making companies, but none so famous and memorable, as the Switzer Licorice Candy Company which once operated its factory on the Saint Louis Landing.  I was always fascinated by the Switzer Candy Company building located at 612-24 N. First Street when I first laid eyes upon it in 1992, as a young teenager. There was something truly nostalgic about the place, with its “ghost signs” painted on the sides of the building.  One could see the Switzer logo while crossing the Eads Bridge, almost as a welcoming to the Landing and city itself.  The sign read, “Home of Switzer Licorice and Cherry Red Candy” at that time. The other side of the building had overlapping painted signs through the years, the most recent of which was a picture of a candy licorice box, which read “Home of Switzer’s Old Fashioned Licorice”.

The building had long since been abandoned by Switzer Candy Company in the time of my youth, but its cast iron green façade stood almost beckoning me to figure her out. Time would pass, and I would take this building for granted, until around the year 2006.  At that time, I had worked downtown and began photographing the area and she would summon me, yet again, to come take a look.  I was able to take pictures of the building just as a rehab by Red Brick Realty was about to take place to turn the building into a mixed-use development including retail space and lofts for downtown living. I was very excited to finally see some new life about to be breathed into this historical gem. However, the intense storms of that year would have other plans in store for her.  Near 90 mile an hour winds blew through the city that summer, and unfortunately the building collapsed soon thereafter, unable to be restored, with the bulk of demolition having been done in the year 2007.

The building was originally built around the year 1874, just as the Eads Bridge was nearing completion next to her.  The original occupant of the building was a company started by Giles F. Filley, a man who had a head for business, and a knack for seeing things of the future.  The company he ran was called Excelsior Manufacturing Company which made Charter Oak Stoves. This company would later become Charter Oak Stoves and Range Company and move out of the building. Around the turn of the century, about the year 1900, the former street peddling Frederick Michael Switzer, a young Irish immigrant to Saint Louis at that time, would start his own company called F.M. Switzer and Co.  He had an aptitude for selling his candies from a horse drawn cart, previously in the late 1880’s, when the original headquarters were located at 621 N. First Street (courtesy- Switzer family archives, switzercandy.com).

The F.M. Switzer and Co. made many candies including “Yellow Jackets”, chocolate soldiers, jelly candy and most famous of all, licorice. During World War 1, red and chocolate licorice were produced, which made the product skyrocket in popularity.  Sugar rationing, at that time, made producing licorice more profitable, and thus became more of the sole focus of the company during that decade. Soon thereafter, Switzer’s Licorice became the best-selling licorice in America.

I interviewed Mehlville resident Dave Meyers, age 66, who said the following regarding his memories of the factory: “As a young boy, growing up in St. Louis, one of the highlights of my trips to the Riverfront, was the purchase of Switzer’s Licorice. My parents, in the late 50’s and early 60’s, would head downtown for a ride on the SS Admiral. Prior to boarding the boat, my parents would purchase several packages of licorice, usually red, from a street vendor pushing a cart. The licorice was always fresh and had a very distinctive aroma to it. The Switzer Licorice Factory was located next to the Eads Bridge; however, the distinctive smell was the first thing you would encounter, upon stepping off the Washington streetcar. My parents and I always knew we were close to our Riverfront destination when we smelled the Switzer Licorice Factory candy. The only complaint I had was, I couldn’t open it fast enough!”

As fate would have it, in the late 1960’s the factory would move its location, after a merger with Beatrice Foods occurred. Later, Leaf Industries would purchase the company and sell it to The Hershey Company in the 1990’s. Hershey made Twizzlers Licorice, so Switzer Licorice was soon put out of production. In 2005, a re-launch of Switzer’s Candy occurred with Michael and Joseph Switzer, the twin grandsons of Frederick himself, holding true to their family’s tradition of quality ingredients at an affordable price. I could not be happier, as red licorice is my favorite indulgence! This spring why not add a little Switzer’s Licorice to your child’s Easter basket, or pick up a few for yourself. Your mouth may just smile, and your inner child thank you, making your spring that much more enjoyable.

All other photos taken by Carrie Paul in 2006