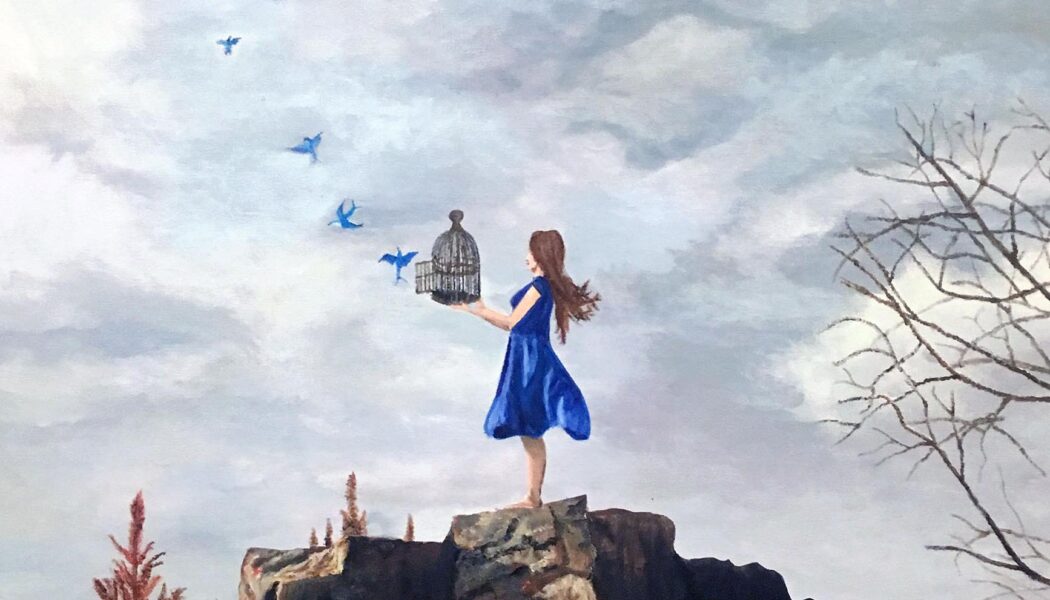 How a painting called “Happiness Released” has released a little happiness into a world which could sure use some right now.

This is a story about a self-taught artist who couldn’t find a gallery to support his work; a gallery owner trying her best to survive in this Corona Virus induced economy and a painting that seems to generate its own happiness to those who view it.

Tom Blood has been creating art since he was a little kid. Yet he knew he probably couldn’t build a career around art, so he chose instead to use his creative talents by creating advertising. Tom’s had a long and successful career, which continues to this day via his business: Blood Lines Creative.

Even though his degree is in journalism, he’s always had a love of art and began painting for fun in the late 1980s. His efforts led to a few gallery shows featuring his surrealistic imagery, inspired by what he considers to be the master of surrealism – Rene Magritte.

Upon the birth of his third child, Tom’s painting room was converted into a downstairs bedroom and his painting came to a halt for more than 17 years.  Tom was used to creating large format, airbrush and acrylic art, and without a place for proper ventilation, he simply stopped.

It took a while, but Tom resumed painting, creating mostly smaller canvasses but still sticking to his surrealistic ways. His skillset seemed to adjust to smaller canvasses and in 2018, Tom had a solo show at 1900 Park – Creative Space and Gallery. It wasn’t a true art gallery but that mattered not – more than 200 people showed up to the opening to see the 25 different paintings on display.

Tom had another show in 2019 – at the Renaissance Airport Hotel. 16 of his newest paintings were featured in the lobby of the hotel. On opening night, a wicked thunderstorm rolled through the area and attendance at the show ended up being a handful of friends and one gallery owner who stopped by to see the work on display.

Efforts to get a show at any St. Louis-based gallery proved futile. Most gallery owners wouldn’t even respond to queries, others gave the “we’ll keep your request on file” response.

What an opening night reception looks like during the pandemic.

Tom continued painting, always trying to get better. Since he resumed painting in the summer of 2015, he has created more than 80 paintings. His work has sold on four different continents and on one website alone, he has had more than 40,000 views of his work.

Last September, Tom attended the Grand Opening of Good Weather Gallery in Edwardsville, Illinois. He knew two of the artists who had work on display and decided to make the trek to see their recent works. That was when he met the owner and curator of the gallery, Brooke Peipert.

Brooke is also an artist, yet she always wanted to have her own gallery. Her space on Main Street in Edwardsville is open and inviting. The Good Weather Gallery’s name is a creation influenced by the 1970’s Simon and Garfunkel song ‘The Only Living Boy in New York.’

“That song has always resonated with me through many stages of my life,” Peipert said. “’Good Weather’ is specifically a play off of a lyric in the song, ‘I get all the news I need from the weather report.’”

But she never quite anticipated the reign of the Corona Virus. Good Weather Gallery has now been open longer during the pandemic than before it. The financial impact on the gallery, much like many small businesses have experienced, has been dramatic. Just ‘staying afloat’ has been a challenge considering the significant drop in street traffic, the curtailing of business hours and an economy where purchases like art are no longer high on the wish list.

Tom and Brooke had stayed in contact with each other and after a few online conversations, Brooke invited Tom to visit the gallery again and discuss a potential show. They decided on a date in late November, not having any idea what kind of turnout they might have at the opening or what level of interest Tom’s work might generate.

The show received some solid press before opening night, including being featured on the front cover of “The Weekend Edge” – an entertainment guide published by the Edwardsville Intelligencer. Of the 32 paintings that were on display, they chose “Happiness Released” as the cover image.

Opening night went well. Though attendance was dampened by a steady rain and heightened fears of indoor gatherings due to the Corona Virus, people did show up, wearing their masks and following social distancing protocols. There were even straws given out so that attendees could sip their beverages without having to lift or lower their masks.

What an opening night reception looks like during the pandemic.

There was music provided by Tom Blood, Jr. and ultimately, two paintings were sold, along with multiple prints. The next morning, another painting joined the sold column.

About two weeks later, seven more paintings were purchased. The sale of these paintings could have gone directly through Tom – but he opted instead to have the sales go through the gallery. Brooke had taken a flying leap of faith on giving Tom a solo show during what is the key selling season for many galleries. Tom wanted to reward that faith.

That brought the number of paintings sold to a total of ten – a definite success for almost any art show and during the pandemic those numbers looked even better.

Which brings us to “Happiness Released”.

From an executional standpoint, Tom believes this work represents some of his best brushwork ever. From a conceptual standpoint, he thinks it’s even better. His wife, Chris, agrees. “It’s my favorite painting he’s done,” said Chris. “I wasn’t too thrilled when he put it into the show but that was his decision.”

Tom’s sister, Pat Sutton, agreed that the painting was among Tom’s best. When Tom had a metal print of the painting made that he gave as a gift to his sister and her husband, Steve, as a joint birthday present, Pat countered with an offer.

The Suttons wanted the original painting and look at it as a painting that they will hand down to one of their children someday.  “Seeing those bluebirds of happiness flying into that dramatic sky is so uplifting,” said Pat. “This is a painting that will lift my spirits every time I see it.”

Once again, Tom wanted the sale to go through Good Weather Gallery. He knows that this particular sale isn’t going to make or break the gallery. But it will certainly help make the end of the year a little brighter.

“I’ve seen firsthand how much Brooke supports local artists. She has certainly supported me and as I’ve gotten to know her, her husband and her two awesome little girls, I wanted to help release a little more happiness into their lives,” said Tom. “Art can be magical. It can lift your spirits, just like those proverbial bluebirds of happiness,” he added.

Brooke agrees and from her perspective, “It’s so awesome to see deserving artists succeed. That brings me great happiness as well.”

During this year of the Corona Virus that has brought so much suffering, death and despair, it’s awesome to be able to use the power of art to not ‘pay it forward’, but rather, to ‘paint it forward’.

“Happiness Released” has been released to lift the spirits of its new owner. It’s made the end of the year a little brighter for Good Weather Gallery. And it’s fired up Tom to continue his quest to get better as an artist.

What more can you ask of a painting?

Tom Blood’s solo art show, “The Idea Painter” will be on display through January 9th, 2021 at Good Weather Gallery, 301 N. Main Street in Edwardsville, Illinois. There will be a closing reception on Saturday, January 9th from 6-9 pm.  Social distancing protocols will be in effect. To arrange a private appointment, visit GoodWeatherArtGallery.com/contact-us

Music is Good for Children and Other Living Things:Classic FM ... See MoreSee Less

Wales’ new plan for music education is triple the amount previously provided for the art form by the Welsh government.
View on Facebook
· Share