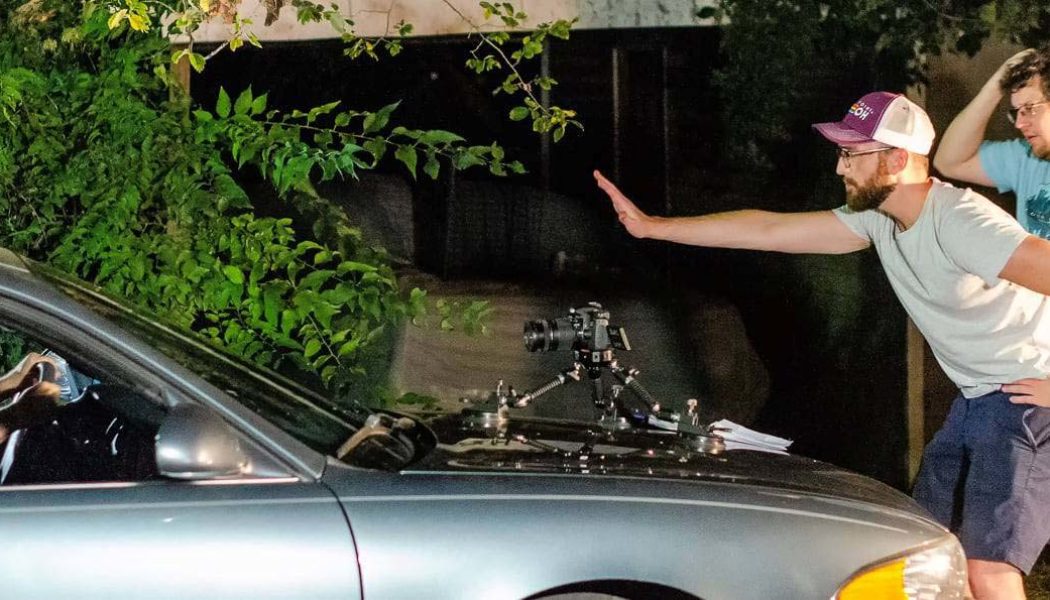 In the early days of the film program at Southwestern Illinois College, 12 or so years ago, students were wilder and crazier than the (relatively) more normal kids I teach today.  And of the wild and crazy students back then, Tim Venhaus was one of the wildest and craziest.  Other students spoke with awe about the epic amounts of alcohol that Tim could drink and still function.  He was always cutting up in class, making everyone laugh (including me, the teacher) and procrastinating on everything until the last possible minute.  I remember several student film screenings when Tim would still be in our little basement classroom frantically finishing the final edit of his film even as the screening was already underway upstairs in front of a packed theater.  Halfway through the event, Tim would finally rush into the theater and hand me a DVD of his film, fresh out of the burner, just in time to entertain the appreciative crowd.

And yet, in spite of this craziness (or perhaps because of it) he ended up being one of the best and most prolific filmmakers to come through the program.  Tim completed several hilarious, ambitious, daring, and boundary-breaking films, including Confetti Sauce, a documentary about motorcycle stunt riders, narrated by Tim in the guise of his fictional alter-ego, Arthur Stevenson, a recurring character in his oeuvre.  I can still remember my horror when I first saw his footage of a rider falling off his motorcycle and tumbling across the asphalt parking lot, and Tim’s voice on the tape: “WHOA!  Holy sh#t!  Dude!  That was AWESOME!”  I spent a lot of time back then worrying about being fired because of the crazy antics of students like Tim.

Another Tim Venhaus movie from this time was Lunchbreak, a story of two construction workers eating their bag lunches on a bench intercut with scenes of an obnoxious lawyer walking down the street insulting and berating everybody, parallel stories that eventually come together when the workers see the lawyer’s head split open like a watermelon by a falling I-beam.  In a “Best of SWIC” film festival we had a few years later to showcase the best movies to come out of the program, Lunchbreak was voted Best Film by members of the audience, which means that Tim really was the best of the best.

How he managed to persevere and produce such winning, entertaining films in spite of his wild lifestyle and slacker façade is a fascinating story, one that got even more amazing over the years, until the story ended abruptly with his tragic death in December, 2018.  Southwestern Illinois College will revisit the life and work of this distinctive, talented young man in a retrospective film screening, Sunday, December 15 at 3:00 in the Arts and Humanities Theater (LAC 1370).

The event is free and open to the public and will include the world premiere of the last script Tim wrote, Dad Eat Dog, which was posthumously made into a film through the incredible efforts of his family and friends.  The film was produced by Tim’s mother, Lynn Venhaus, journalist and member of the St. Louis Film Critics Association, who decided to honor Tim’s memory by bringing his last script to the screen.

“It was a real labor of love,” she explained to me after the shoot.  “A lot of people really wanted to be a part of it.  I just got everyone together and they just took over from there.”  Charlie, Tim’s brother, did most of the directing, friend Ryan Culbertson did the shooting, and Tim’s boyhood buddies Tory Dahlhoff and Joey Paserski (from the bands Horshack and Brother George) are making music for the film.   Lynn contributed a few revisions to Tim’s original script.  “Because it turned out to be a tribute to him, we added some ‘Tim-isms’ and references to his other films and bands that he was friends with, that sort of thing.  I think his voice really comes through in the movie.”

I can vouch for that.  Like all of Tim’s work, Dad Eat Dog features bizarre and hilarious actions, abrupt transitions to different scenes, and characters who readily digress into impassioned discussions about movie actors, who played in what film, and which actor was better.

I initially assumed that Tim’s writing and directing talent was a fluke that came miraculously out of nowhere.  That couldn’t be further from the truth.  In fact, Tim came from a family of film lovers, people who devoured movies since way before his birth.  Lynn filled me in recently on some of his history I didn’t know.

“My parents were divorced, so we lived with my grandparents.  They lived through the Depression and always went to the movies.  My grandfather loved all the old gangster movies, Bogart, and Cagney.  And my mom always loved old movies, so on the weekends we’d stay up with her watching movies,” she explained.  “Then, when Tim was like three years old, he sat perfectly still on my lap and watched Pee Wee Herman’s Big Adventure all the way through, with no kid squirming or anything. (Laughs). So that’s kind of the movie that started it.  And later, I was writing movie reviews for the Belleville News Democrat, so I had to go every week to see movies, so he would tag along.  I know some of the things he saw were totally inappropriate, but you could not tell that kid no!”

Then, like many kids of the camcorder generation, Tim started playing around with making his own movies.  “He was always in his room writing little film scripts.  He’d get his relatives, his cousins to be in them.  They’d be gangsters or whatever, and they were always really funny.  Hilarious pre-pubescent hijinks.”  He found ways to make movies in high school too, usually to get out of having to do more traditional school assignments.

Which brings us up to Tim’s first attempt at college.  As Lynn explains, it didn’t go well.  “I was a single mom, and I was always working, so I’d call home at like 4 o’clock in the afternoon and Tim would sound like he was just waking up.  I’d say, ‘Don’t you have class?’ and he’d say ‘OH! Man! I overslept!’  Eventually, he quit going and got a job at Applebee’s.  He was partying a lot and just frittering his life away.”

That’s a familiar story, especially around here.  A young, creative person seriously underachieving.  But here’s where the story gets interesting.  Many creative kids do not enjoy much parental support; most parents want to see their kids pursue safe, profitable professions like Accounting or Nursing, not something “impractical” like Art, Music, or Film.  But not Lynn.

“I remember thinking, ‘Are you just going to be a waiter?  You have so much potential!  So eventually, I devised this plan.  It was right before school started in August, and I handed him a check and said, ‘I want you to go to SWIC and sign up for just creative classes.  Don’t worry about Gen Ed, just take Film, Writing, whatever, so you can get back in to doing what you love.’  And that’s when he did Lunchbreak.”

How I wish all students had this kind of support!  Lynn always believed in Tim’s potential and encouraged him to pursue his passion for film.  Tim’s path was always bumpy, but he eventually finished a film degree at SIU-Carbondale, where he worked on Alt.News 26:46, the student-run television program.  Every year the station would have a screenwriting contest, and the winning script would get produced.  Tim was the first student to win the contest two years in a row.

Like many creative people, Tim’s career never moved in a straight line, instead zigzagging forward and backwards, then forward again.  After graduating from SIU-C and doing an internship at Sesame Street in New York, Tim ended up back in the St. Louis area, working in restaurants, drinking too much, and ended up in rehab and A.A.   As Lynn explained, “He struggled so much!  He had all these ideas going on, but he would talk about what a bad person he was . . . he struggled with those demons.  There are so many creative people who are like that, who think they are not worthy of success, because they screw up, but I just want them to know that you can have a second and third and fourth chance.”

Tim took advantage of his second chances and in January 2017, he became clean and sober and dedicated himself anew to his passion for filmmaking, enrolling in the graduate program in Screenwriting at DePaul University in Chicago.  It was there he wrote Dad Eat Dog, which brought down the house during the table reading in class.   Lynn’s scheme to get him back in school to pursue his dreams was really paying off.  “At DePaul, he finally felt like he was on the right path,” she told me.  “He was so on fire about his classes!  He loved his teachers, and kept going on about all the stuff he was going to do.  He was so excited!”

Among lots of other things, the Tim Venhaus retrospective will be a testament to a beautiful relationship between a mother and son centered around a mutual love for film.  “He’s kind of a mini me,” Lynn said. “I was that creative kid who didn’t fit in.  I was never that wild, I was never much of a partier, but I understood him.”  The two of them even attended the Sundance Film Festival together (by volunteering as ushers).  According to Lynn, “Tim saw like, 30 movies in 10 days and kept all the ticket stubs.  He said to me, ‘This is the greatest time of my life!’”

Losing someone so full of life, energy, and laughter has been hard on everyone who knew him.  Making sense of such a tragic loss is hard too.

“Like several other members of my family for generations, Tim struggled with alcohol and drugs,” Lynn explained.  “He was two years’ sober and was following his dream. He was home from grad school on break, and wanted to make some money for the next trimester. He had worked a demanding double shift at a restaurant that day, had to work early the next day, couldn’t sleep. He made a mistake that ended tragically. He worked so hard to be productive and positive. He was like many young people trying to find their way in the world. He was so creative and had so much potential. I hope we can turn his struggles into inspiration.”

Lynn, like everyone else who knew Tim and enjoyed his hilarious work, sees the retrospective as a chance to celebrate his life, hear his voice again, and savor the impact he had on so many.  “It’s going to let people remember him for how he lived, and not how he died.  He did live life to the fullest, and I didn’t realize his impact on others until his death, when the outpouring was truly remarkable. He made an impression on everyone who knew him or met him.  If you mean that much to so many others, then you have truly lived a good life.”

What: The Life of Tim Venhaus Retrospective

A Vision for Talent: The St. Louis Teen Talent Competition

homage to B movies.

The Lot (StL) – Jamo Presents The Scandaleros - A Tribute to Watkins Glen Summer Jam 1973: The Music of The Allman Brothers, The Grateful Dead, and The Band with special guest Funky Butt Brass Band Horns; 7p