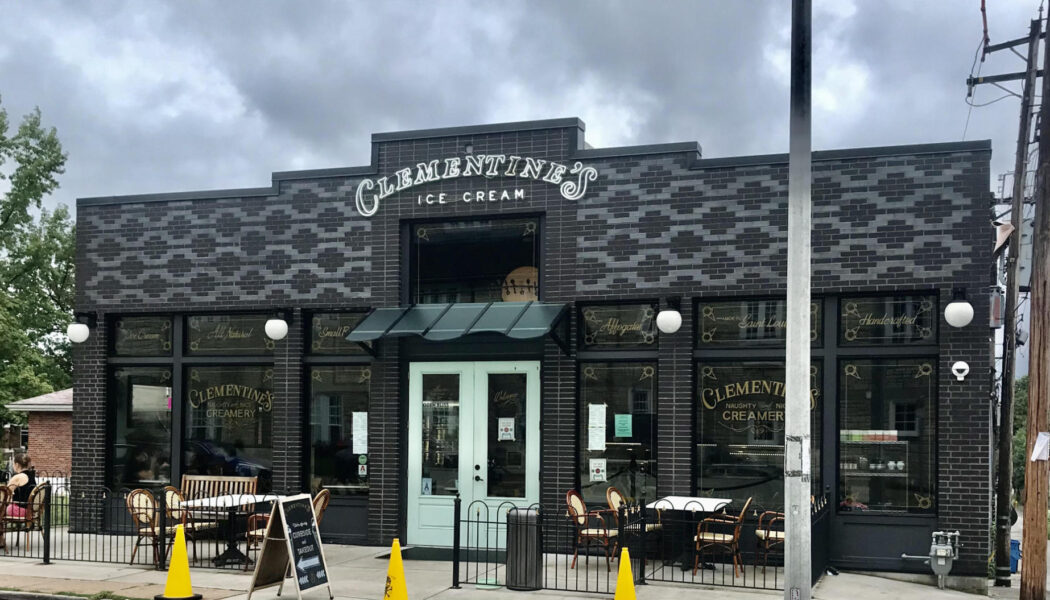 As the Labor Day celebrations signal the end of pool season and the Missouri Bicentennial fair and Autumn celebrations begin, I can’t help reflecting on the history of what summer must have been like two hundred years ago in Saint Louis.  A few thoughts come to mind -hot, humid, and carefree.  I can’t think of a better way to beat the heat and celebrate the Labor Day holiday then by spending it with family and friends enjoying barbecue and my favorite summertime indulgence:  ice cream!  Ice cream was popularized, and some say the walk away cone may have been invented at The Louisiana Purchase Exposition held at Forest Park in Saint Louis, known more popularly as the Saint Louis World’s Fair in Forest Park in 1904.  Historians agree that the origin of ice cream itself goes as far back as ancient times and has always been enjoyed around the world over.  Of course you don’t need it to be hot, or even a summer day, to have an excuse for eating and enjoying it.  My first real ice cream cone I truly ever looked forward to was one from Ted Drewes.  As a child growing up in South Saint Louis and living in the Lindenwood Park neighborhood, I had the luxury of going to this iconic custard shop more often than the average Saint Louisan.  I even won a coloring contest at a young age and made the Saint Louis Post Dispatch paper when I was a child back in 1979.  My prize?  More ice cream to take home! And so it began… my love affair with this cool and refreshing summertime (or anytime) dessert of countless flavors which never seems to disappoint.

Ted Drewes located at 6726 Chippewa in South Saint Louis at one time was one of the sweetest stops on what was then called Old Route 66. Ted Drewes, Sr. had opened several stores (one in Natural Bridge, one off Grand and the one off Route 66). In 1958, just the South Grand and Chippewa stores remained, and Ted Drewes, Jr. later expanded the location on Chippewa, which was the busier of the two locations. On any given day, locals and tourists alike will wait in lines wrapped around the building for this famous refreshment which always seems to hit the spot.  Whether you savor a famous “concrete” (a shake so thick it can be turned upside down) a float, a sundae, or a cone, the toppings are seemingly endless.  Lines actually move at a swift pace so check out the frozen custard stand which has been creating memorable summer nights ever since its inception. In Ted’s words, “It really is good guys …and gals!”

As far as the Mother Road is concerned, it is no longer the main thoroughfare west, but despite this has a special place in history and still makes an interesting detour.  Speaking of roads and cars, another amazing spot to indulge your sweet tooth is located in the former “Automotive Row” which today is proudly called The Midtown Alley Design District.  On the street of Locust, you will find a unique and one of a kind ice cream shop, and the only art deco ice cream shop on this side of the Mississippi.  It is called The Fountain on Locust.  The building itself was built around 1916 and once housed the Supreme Car Company which made Stutz high performance custom sports sedans called the Stutz Blackhawk and Stutz Bearcat.  According to its website, Joy Grdnic purchased this building in 2005 and opened her dream store in 2008.  It is one of the most beautiful art deco (1910-1939 architectural style) ice cream martini bars that I have been to.  Even the restrooms were once voted as the best in America!  The decadent hand crafted sundaes and ice cream martinis are what make this the epicenter of the up and coming district in the city. On my visit, I tried a vanilla sundae topped with marshmallow sauce and strawberries and it was delicious.  They even have the world’s smallest sundae, if you just wish for a taste of something sweet.  The memories within its walls made for an enjoyable outing with my mother as I soaked in the history of the district and the art deco atmosphere to boot.

Speaking of the 1904 World’s Fair, I can’t think of a more romantic dessert spot than Cyrano’s Cafe and their famous desserts from the heart.   Their signature sundae called World’s Fair Eclair (French vanilla ice cream, delicate pastry, gold brick and whipped cream) is beyond delectable and you will want two spoons for this one!  The name Cyrano (Greek origin) came from a love poem written in 1897 from a French poet, about a character, Cyrano de Bergerac, who fell in love with a woman named Roxane. The then owners stated the name encompassed the relationships of friends, family, and lovers alike.  Originally located just west of Forest Park in the 1960’s and tucked into a basement off Clayton and DeMun Avenue, the location has since moved several times.  Current owners Carolyn and Charles Down revived the namesake when the café had to close and is located off of Lockwood in the heart of Old Orchard in the Webster Groves neighborhood. The new building and cozy yet romantic space, was also once a car dealership for the Chrysler automotive brand DeSoto.  Cyrano’s has many ice cream sundae toppings, old-fashioned floats, and sorbets to suit whatever mood your taste buds crave. So come hungry for dinner or just for dessert, but whatever you do, save room for some. This award winning ice cream menu will have you saying the infamous quote, “the best time for ice cream is always.”

If you are feeling like you need a little decadence, Clementine’s Naughty and Nice Ice Cream was voted by Oprah Magazine in 2019 as America’s “sexiest ice cream” and made the O- list.  Who knew ice cream could be so …. well …. “hot”?  Clementine’s serves up handcrafted unique flavored variations at five locations located in Lafayette Square, Lake Saint Louis, Southampton on Macklind Avenue,  and Town and Country.  Tiramisu, watermelon, gooey butter cake, salted caramel, and midnight pleasures (triple dark chocolate but never bitter) can be ordered. If you want something “nice” select from the made from scratch samples of the day, or take a walk on the wild side for a something a little more adventurous and try the “naughty” side of the menu, which has some alcohol in the recipe.  Pink champagne sorbet or boozy banana rum are refreshing and one you can’t help but say “Cheers!” to.

Whether you get your kicks on the Old Route 66, or simply soaking up a bit of sun in these last few days of summer, we “all scream for ice cream” and things `a la mode just seem to taste that much better.  Consider experimenting with some playful combinations of toppings and flavors at anyone of these unique and genial locations while exploring some of the history in the area when you visit. Doesn’t every sundae deserve some sprinkles or a cherry on top? I can’t think of a better way to kick off fall.

All pictures taken by:  Carrie Paul

Some information taken from the websites of Ted Drewes and The Fountain on Locust.