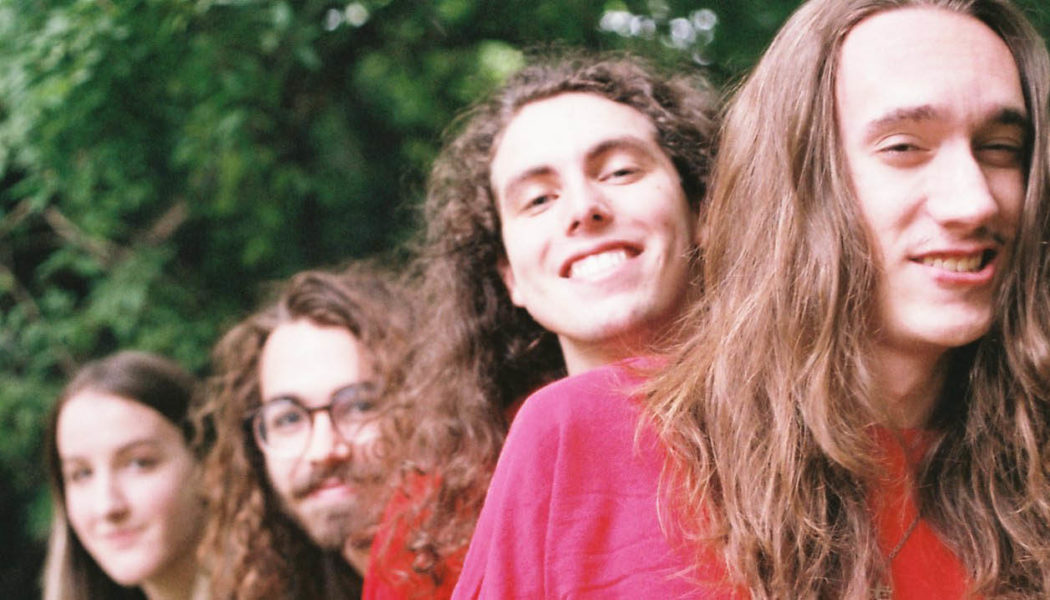 An Interview with Jackie Presley

Isobel: How did Jackie Presley come together?

Max: I had written a bunch of songs last winter. I never recorded, wrote the lyrics, or did anything with them. Springtime came around, everyone else who was in Big Tobacco* started making pages and posting music with their solo stuff. I wanted to start doing something, so I just started writing all the songs, arranging them and I would post my really crappy demos on SoundCloud. Eventually, I made a post saying I would love to get a band together and start playing live shows again. I got a message from Kelly, Ben, and Aaron that they all wanted to join. It sounded like an all-star cast to me, so after that, we started playing together around early spring.

Aaron: It was about March or February after I got kicked out of Handsome Boy*.

Ben: It was during the two months that Handsome Boy wasn’t doing anything.

*Big Tobacco was a St. Louis band that Max was a member of.

*Aaron, Max, and Ben were all members of St. Louis band Handsome Boy.

Isobel: Is there any meaning behind the name?

Max: I love this question. It’s my favorite one because it always throws everyone off. I was literally playing Fortnite one night with my friends Garrett and Coleman (from Big Tobacco); I don’t remember how someone said it, but I just remember Coleman saying, “…Jackie Presley.” I thought it sounded cool, and that one day I would name my solo project that. Then, three months later after I started recording all the songs, I thought, “Well, I guess I’ll call it ‘Jackie Presley.’” There was a brief moment in time where I wanted to change it to Boy Howdy, but Ben and Aaron both threatened to leave the band if it was changed to that.

Ben: It’s notable that I was in another band that was also trying to change its name to Boy Howdy.

Isobel: Since I assume you all go to Webster University*, I am curious about how the music scene works there, considering that quite a few Webster bands are part of the overall St. Louis scene. *Max does not go to Webster.

Aaron: We all hang out, we all know each other in some way.

Max: Big Tobacco could be considered a Webster band, since Chris, Daniel, and Coleman go there; there’s the Sigmund Frauds, everyone goes to Webster there except George.

Ben: Specifically for us, I met Aaron at freshman orientation, which is how he joined Handsome Boy. We all became friends, then him and Handsome Boy turned into him and Jackie Presley.

Kelly: Coleman had messaged me on Instagram and I was almost in a band with him.

Max: I met Kelly through Coleman. If you’re a musician at Webster, the other musicians will eventually find you.

Ben: It is a pretty small school, so it is really easy to find people.

Aaron: It really is a small music scene. There are not many bands our age.

Isobel: Is there a difference from bands in the conservatory?

Ben: Definitely. I have had the opportunity to record some conservatory bands through Webster’s recording classes because they are around. I don’t really know the people in the bands that much, except for Daniel from Big Tobacco. The connections are there but are not as strong as we would like them to be. No conservatory bands have played Webster Presents shows, so they have never been in those circles. They play at Webster Garden Cafe and whatnot. It’s different, but they are connected still.

Aaron: They play the smaller shows. You can’t have a show where there’s a jazz group then hard rock right after, so that’s kind of why.

Ben: I want to hear more of the conservatory bands.

Aaron: There was a song that Max wrote and recorded on his laptop; he put it on SoundCloud for us to listen to. There was this drum part that was a normal drum part until he put a delay on it.

Aaron: I tried to replicate the beat of it.

Max: We started with the drums then we did rhythm guitar… All of the songs we are playing right now, I wrote over half a year ago. I just remember coming home from work one day and I wrote the lead part first and thought, “That sounds really cool,” then put some chords over it then went to bed. I would play it every day afterwards but never wrote lyrics for it until three months later when I decided I needed to start doing stuff. I think I wrote it because I needed to write lyrics. I wrote the lyrics for all the songs on this demo that night; I didn’t leave my room until I had all the lyrics formed. I think I just started taking my antidepressants and thought, “Alright, this is cool, I’ll write about how I’m feeling differently and now, things are cool.”

Isobel: How long have you been performing live?

Kelly: Our first show was June 1st, for LUFest at Foam.

Ben: It was terrifying.

Max: It was also really fun.

Max: We’ve played two other shows since then.

Ben: The Way Out Club was so fun.

Ben: We’re playing with Summer Like the Season and Frankie Valet at Foam soon, on September 24th.

Isobel: What’s been your favorite show to date?

Kelly: It has to be LUFest.

Max: We had a huge crowd at LUFest. I was going insane; there was a whole lot of energy.

Ben: I was all anxiety for those first few shows. Way Out Club was the first one I could actually enjoy.

Max: I was having the time of my life at our very first show. I fell over probably four times.

Max: I was moving my body so much.

Max: There was so much noise. It was great.

Ben: Objectively, that was the most energy we’ve had at a show. Everyone we love came out. It was amazing. So far, all of the shows have been good some way or another.

Isobel: Are there any shows in the future that you are excited for?

Ben: Frankie Valet and Summer Like the Season is going to be so good.

Max: We played with Summer Like the Season at the Way Out Club. They’re from Detroit.

Isobel: I haven’t come across any STL bands that categorize themselves as shoegaze until Jackie Presley. In fact, I feel like shoegaze is a rare gem in the late 2010s. What drove you to produce shoegaze?

Ben: Loveless by My Bloody Valentine.

Max: In my senior year of high school, I started listening to a lot of Salvia Palth. That really inspired me to start making shoegazy stuff. Loveless was also a huge influence.

Ben: Personally, Loveless is one of my favorite albums of all time. It’s just amazing. As soon as Max said he was starting a band and said the word “shoegaze”, I was all in.

Max: Yo La Tengo is another influence. I love the “Sugarcube” and “Cherry Chapstick” stuff. I love heavy, fuzzy-sounding things. I love and always wanted to make music like that and didn’t have a pedalboard of my own until I got one eventually.

Kelly: You built that recently?

Ben: When we were in Handsome Boy, he had two pedals.

Max: November was when I got my first set of pedals. It was a lot of money on that board. It’s got a lot of effects; it does what it’s supposed to do. I’m about to get the Avalanche Run, too.

Isobel: Are you more influenced by older shoegaze, such as Slowdive, Lush, My Bloody Valentine, or more modern/current music?

Max: I would say older shoegaze, but I try to put a modern twist.

Ben: You try to make it poppy.

Max: It doesn’t help that the only song released right now is our most poppy song, but that’s the only song on our setlist that has no fuzz or distortion in any way. Our other songs are much more heavier. The song “Miss You” is a happy, little fun song up until the end when we do that giant noise jam. I try really hard to write catchy melodies and make shoegaze more appealing to people who maybe aren’t used to that style of music. Shoegaze is so niche. It’s going to be hard to develop a fanbase besides people who already like shoegaze and trying to get people to listen to a fun band.

Max: Exactly, I’m trying to be like Chuck Berry to rock’n’roll.

Isobel: How has the recording process been for your new record?

Kelly: Finding out when we don’t work, then record whenever we can.

Max: We’re trying our best. It’s a hard time right now, because we all work a lot. Schedules don’t seem to line up right now.

Aaron: But, we have the drums and bass done.

Ben: The recording process is going well, albeit slow. However, we are getting some steam going soon, and what we have recorded so far sounds really good.

Aaron: It’s all done in my home studio.

Ben: It is at the Aaron Studio, which also records The Public.

Isobel: Give me your favorite venue to play or watch shows at in STL.

Aaron: Delmar Hall, even though we have never played there.

Ben: Foam deserves all the love they can get.

Kelly: The Old Rock House too, because of their nachos and couches.

Max: The Old Rock House is my favorite.

Max: I’ve been to the Old Rock House twice. I saw Big Thief and they didn’t have an encore. Total power move.

Isobel: Who are your favorite STL bands to watch or perform with?

Kelly: Jr. Clooney is the best.

Ben: Jr. Clooney is amazing. The Public are the best people ever. Frankie Valet is my favorite band to listen to.

Isobel: When should we expect the record to come out?

Max: October at the latest.

Aaron: That makes it more doable.

Max: Hopefully by then, we will have enough newer songs for an album after the EP is released. We’ll have to find an interim bass player, since Ben is going to Vienna from winter to spring, so if anybody’s interested in playing bass and knows there is no guarantee that you will be in the band when Ben gets back.

Ben: I have all of my parts written down. It’ll be easy.

Max: He writes down everything and also is not replaceable.