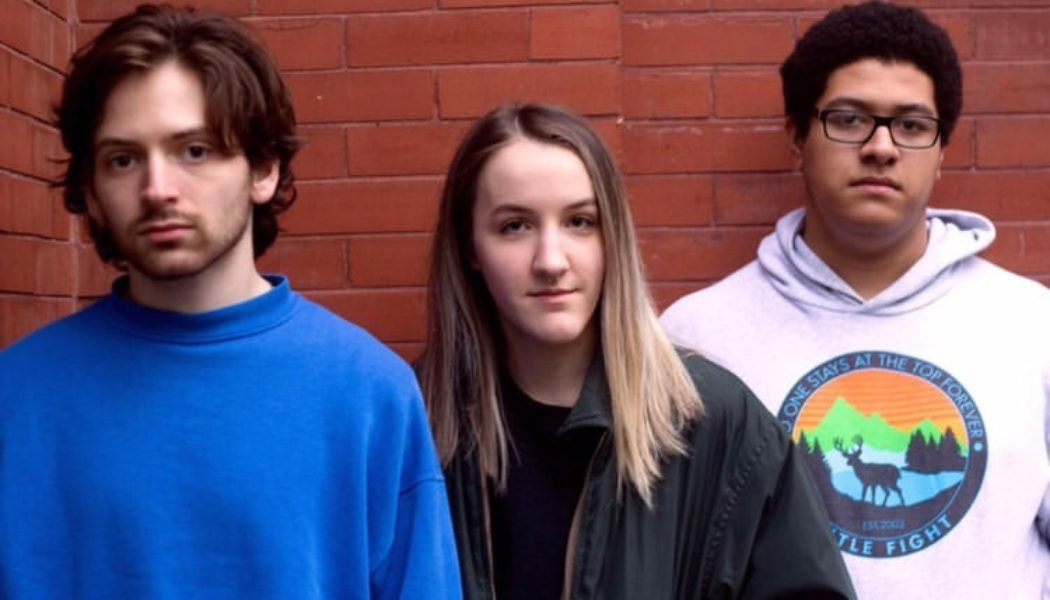 Isobel Abbott-Dethrow sat down with the members of St. Louis band Inches From Glory: Marty, Kelly*, and Blake.

*Kelly is also a member of Jackie Presley.

Isobel: How did Inches From Glory come together?

Blake: For the most part, it was my solo project. I started it when I was about thirteen. I was listening to Rise Against a lot; I was the worst kind of punk kid. Then, I found Title Fight and thought they were the best band ever. I started writing more in that emo style, getting a bit more mathy with it. For a long time, it was just me–I had no intention to play a show. Then, I met Kelly through a mutual friend and we talked a lot and had the same music taste. Initially, I asked, “Hey, you want to be in a band?”

Kelly: You sent me the EP and I listened to it in the car. I thought it was really good. I kept listening to it and thought, I’ll be in this band for sure.

Blake: I knew Marty because we worked together.

Marty: We only worked a week together.

Blake: I worked at STL Rock School in 2016, then I quit. Marty started a couple months after I quit, then I came back. Marty is definitely one of the best drummers I know who is into anything punk related. It basically started as a solo project, then these beautiful people came in.

Isobel: Is it difficult being full-time students while regularly performing shows?

Kelly: It’s not as hard as you think, at least for me.

Blake: I would say it is because I’m also a music student; I’m a Jazz Performance major, so I already have really high credit hours. I do other gigs on top of this band.

Blake: I would say it is difficult to move around my schedule, but the band takes a lot of priority on top of other things. I mean, it’s definitely doable.

Marty: I’m not in college, but I work as much as they are in school. I dropped out in 2015 after the first semester in community college. I left before finals and thought I was just going to work.

Isobel: (For Kelly) Since you are also in Jackie Presley, how do you find time or management to play for two bands while a full-time student?

Kelly: I don’t really have a lot of free time, which is fine. It keeps me busy. This is a better question for Blake, since he’s in more bands than me.

Blake: You don’t get a lot of free time. I remember last year, last semester, I didn’t want to play music anymore. I had music at school and outside of school. I teach music, so I was really burnt out for a while, but summer helped out with that. Good time management is really important. I keep a very detailed, color coded calendar, so that’s really helpful. I try being aware of the time I have and not be stingy about it; I make an hour everyday to sit at home, play video games, and be a human being. Becoming aware of your schedule and being consistent about it helps.

Isobel: I like how you describe your music as “jangly punk rock.” What drove you to produce this type of music? What has influenced you?

Blake: It comes from a lot of influences. All of us are from a little different music backgrounds, but still gear in the same sense. Kelly listens to a lot more mathier stuff than me. I’m more on the emo, second wave emo side; I also really love jazz and 80s alternative such as the Cure and the Smiths.

Marty: I grew up listening to Gorillaz and Phoenix. I like more electronic, hip-hoppy music. It also explains why I stuck with the drums. It feels the most natural with those interests.

Isobel: I remember my first time seeing and hearing about you guys being the Lobby Boxer EP release show at the Duck Room in April. What was that night like for you guys?

Blake: Oh my God, that was so good.

Kelly: No one really came for our set, but it was still fun.

Blake: I was going through a really bad breakup at the time, during that show. I feel like I put a lot more into that show than I did in a long time. It was the day of, it was bad.

Kelly: It was very emo. You poured your heart out.

Blake: For sure. That show brought me back a little bit, thinking there’s still more outside of being in a relationship, like, “Hey, I have something else and this is pretty cool.” Especially with Lobby Boxer, because they are one of the bands that showed me that you don’t have to be famous to write music. Zach used to be my guitar teacher. It was an absolute honor to play with them.

Marty: Not only are they so good at what they do, they are also good people. They are really easy to talk to; it was very humbling to play with them.

Isobel: What was your first ever performance?

Blake: That was a really fun show.

Blake: We did not know we were going to play until the day of.

Marty: My friends and I wanted to put a basement show together. There were two people I’ve played shows with sometimes with since I was nineteen and we decided to throw a house show on New Years’ Day. I just started playing with Kelly and Blake then and it went so well. It was so cool.

Blake: I did cry after our set, I was really happy. It was my first time playing a punk show.

Kelly: It was also my first show ever.

Isobel: What has been your favorite show to date? Are there any shows in the future that people should look out for?

Blake: Lobby Boxer is up there.

Kelly:  The first show we played at Foam. There were so many people; my energy was up that day because of it.

Marty: Lobby Boxer. Also, one of our shows at the Sinkhole. The first time we played there was really fun.

Blake: It was great; I just got a new bass.

Kelly: Aaron Plays, as well. It was a little house festival in Hillsboro with six bands. It was fun.

Blake: Aaron Plays was one of my favorite shows. That was the first time seeing one of my favorite local bands, Reeling. It was a big show for me because Old State was there, and they and Lobby Boxer are the two bands that made me realize that writing music is cool. Aaron from Old State is in Reeling.

Kelly: It was his show at his parents’ house. There was barbecue and spaghetti.

Marty: It was a sweaty show.

Blake: With shows to look out for, we have a show on October 9th.

Isobel: How has your music progressed since the EP, ‘Sorry’, was released?

Blake: It was all me for ‘Sorry’. I had no input whatsoever from anybody else, no one told me, “Hey, this is bad.” I think it turned out pretty well, but everything that went into it was all me. I still am mostly writing songs, but Kelly will tell me if something is bad. I’ll write more towards what you and Marty play. We haven’t done any massive stylistic change; it’s pretty much still straight emo and more genuine. ‘Sorry’ was emotionally taxing for me to write, but we’re all in it together.

Isobel: Will you be releasing anything soon?
Blake: We are in the studio right now.

Blake: There is a little bit of an overlap, but it’s nice. We have something done. It’s a process, just trying to get time for everything. The songs need to be more solid before we go in full-fledged. It might be released late October if we are lucky. Let’s just say fall, maybe winter.

Isobel: Who are your favorite STL bands to listen to or perform with?

Marty: Since I graduated high school, Foxing is definitely one of them. They were super prominent at that time.

Kelly: They were my favorite band in high school, for sure. My roommate was in Foxing for a brief period and helped mix their first album. I still love Foxing. We play with the Public a lot.

Marty: I love the Slow Boys.

Kelly: Jr. Clooney might be my favorite. They are so good, but we never played with them. They’re just really fun to watch.

Marty: Who Goes There is so good.

Blake: Chiller Whale is my friend’s band. They are more indie pop. My friend Carrie is their guitarist and a really awesome musician.

Isobel: Per the request of an anonymous person, can you explain what #BadTakeBlake is?

Kelly: #BadTakeBlake happened when I was hanging with Jackie Presley at Little Caesar’s. Blake tweeted something about Jazzmaster Pickups and it was wrong.

Blake: I said you can’t play shoegaze without a Jazzmaster, that you can’t use a fuzz without having a Jazzmaster. It was stupid.

Kelly: I read the tweet out loud and Max came up with #BadTakeBlake. Someone replied with the hashtag and it stuck.

Blake: I know I have pretty not good opinions sometimes and I’m very vocal. I say terrible things on Twitter. Half the time they are wrong, half the time I’m trying to be funny. It’s not working. I’m 100% for #BadTakeBlake.

Kelly: All of the credit goes to Max.

Blake: We love you, Max.