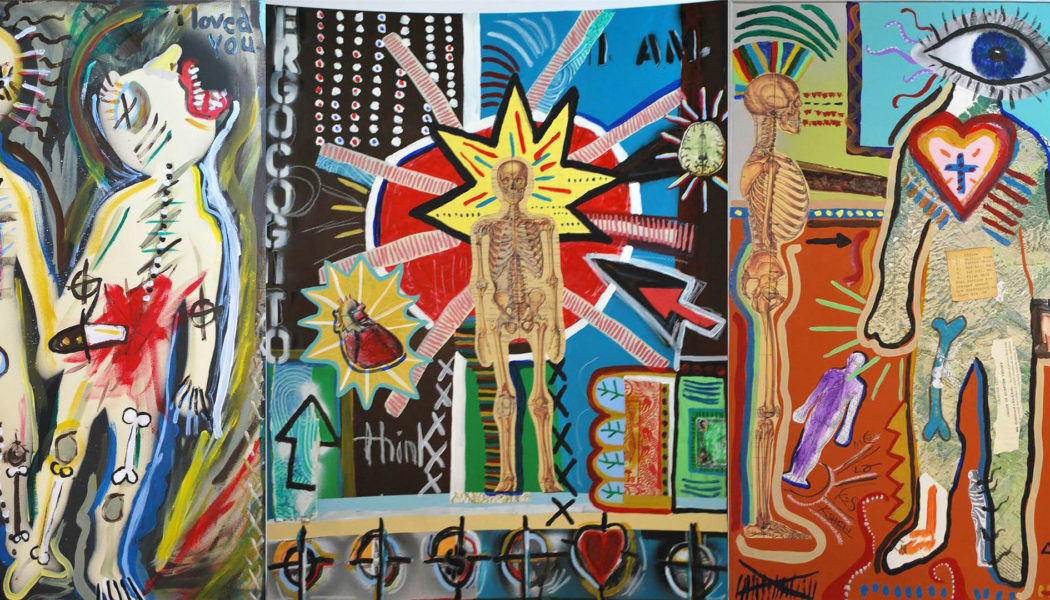 From the beginning, the Gogh-Getters in Edwardsville worked to maintain a presence for the arts downtown.

The organization exposes local artists to audiences by utilizing the space on the wall at Sacred Grounds coffeehouse. Local artists Kerry Smith, Jim Harper, Steve Hartman and Dave Thomas manage the organization named for famous artist, Vincent Van Gogh. All have a passion for the arts because they’ve spent their lives working in the field. By day, they all work in different types of design.

“We’re all from different art organizations and we’re all artists,” said Smith. “Most of us were with the Edwardsville Arts Center.”

“At that point, a lot of us wanted to do our own thing and keep art in the downtown area,” Smith said. “There were three to four galleries in this downtown area and now there’s nothing.  Our history with the arts center led us to this place (Sacred Grounds) which we think is a great place to show. There are hundreds of people coming through here (Sacred Grounds) a day, it’s a fabulous place and that is the difference between a gallery only and a gallery in a coffeeshop like this. Even after the opening, lots of people see the work.”

Since its inception in 2011, Gogh-Getters had a central thrust – to promote the unique experience of downtown Edwardsville. After an exhibition, attendees could enjoy coffee at Sacred Grounds, go to a show at the Wildey Theatre, or eat at a local restaurant.

“We wanted to connect all of that so people could make a night with one of our openings,” Smith said.

Harper can also talk about what makes the city’s unique downtown area.

“In Edwardsville, the old part of downtown is where we keep our culture,” said Harper. “We don’t protest when they want to put chains in and build stuff uptown. We know the city needs that because it’s growth and tax dollars, but where the Wildey is and the coffeeshops, that’s where the culture is. When they moved the Edwardsville Arts Center to the high school, they moved it away from this area. I love it and I take my daughter there, and I think it’s great for the high school students, but for the rest of the city, it becomes a destination that is not a part of the history.”

When it comes to the exhibitions, Gogh-Getters doesn’t specialize in artists in this or that stage of his or her career. The organization promotes new and upcoming artists as well as more established artists.

“We’ve had students show here for the first time,” Harper said. “We try to mix that in with stuff from more established people. We can take the dollars from the established people who sell a lot and put them in with young people and give them a chance.”

Gogh-Getters recently featured the work of new artist Andy Dykeman, a chiropractor and artist from Alton. Dykeman is a painter who mixes in painting with other media. He uses x-rays and medial records, bringing in his background in the medical field.

“When I saw his work, I wanted to buy some,” Harper said. “It was stunning.”

Harper said that he loves the vibe of Sacred Grounds. He also said that some more established artists shy away from showing in coffeeshops, but Sacred Grounds has much to offer the established artists though the sheer volume of people it brings in. A gallery usually promotes a show and then the show is over after the allotted time period. However, coffeeshops allow art to be displayed for a longer period. They praise Sacred Grounds owner Jen Courtney for letting the organization have the space and the freedom to create the shows they want to create.

“When we have an opening, we’ll usually have some sales that night,” he said. “However, the sales continue throughout the whole cycle.”

Like Gogh-Getters, Sacred Grounds roots are in Edwardsville. The locally-owned coffeehouse started in 1999.  Courtney said she envisioned a place, in the beginning, that meant community.  She also wanted to offer the public homemade food and baked goods at affordable prices. The coffeehouse entrepreneur was told by the mayor of Edwardsville when she opened that few people walked on her side of Main Street. His words were other than prophetic, as Sacred Grounds celebrates its 20th anniversary this year! Like anything, the coffeehouse market has changed over the years.

“Locally-roasted coffee was important to me,” she said. “Twenty years ago, there weren’t very many micro roasters. We used beans from Kaldi’s for the first ten years then I decided to go with an even smaller local roaster – Mississippi Mud Roasters. We have used their beans for the last ten years. When we first started out, everyone wanted dark-roasted coffee. The darker the better. Now everyone wants light or medium roast. We tend to go with medium light as the coffee takes on sour notes if you go too light.”

Peoria artist Richard Wehrs – a former graduate student at Southern Illinois University at Edwardsville – promoted a show through Gogh-Getters and his work now appears all over the country. Wehrs displayed a group of ceramic masks at Sacred Grounds – 50 of them – described by Harper as “beautiful.”

In addition to promoting art for contemplation, the organization also promotes art for action. They do what Harper and Smith call a “voting show” on election day. Artists, local and non-local, design posters promoting the act of voting and they can be taken off the wall by the viewer.

Harper, Smith, Hartman and Thomas evaluate the work of various artists and then decide who to showcase. Gogh-Getters receives many submissions and they have a full calendar for a year.

“As veterans of art and design, we try to keep the quality up because we have to fund it,” Harper said. “If we don’t get good art in here it won’t sell and then we can’t keep doing this.”

Smith said having four people curating brings variety to the work being shown. The work load picks up in the weeks before a showing and the small staff takes on various assignments in those weeks. Shows are promoted via social media and through posters and flyers.

“We have it down to a science,” Harper said. “We have a checklist, and everybody does their thing; between the four of us, it’s enough hours to give us a nervous breakdown before the show and then we get a breather.”

“His work is so diverse,” Smith said. “It’s appeared in Time magazine. He’s not just a photographer. The show we had was photography based.”

Smith and Harper would both like to see more photography-based shows. They’re looking for more artistic work as opposed to a snap-and-shoot work.

“I feel like it’s almost a community service thing,” Harper said. “If you’re going to devote your time and volunteer like we do, it’s nice to have something you’re passionate about. It gives people a great place to show and keeps people circulating – we promote the restaurants and the (Wildey) theatre.”

Gogh-Getters does seven or eight shows a year. The staff prefers what Smith and Harper call “off-the-path” work.

“This is something we want to continue to do and continue to have great shows,” Harper said on the future.

Smith said he would like for young people to become more involved and bring a more technological savvy approach to promoting and managing shows.

Mike's LaRosa Cabana Bar (Portage de Sioux) – 63rd anniversary of the Blessing of the Fleet annual boat parade; have your watercraft blessed as it passes by the Shrine of Our Lady of the Rivers; live bands: Rogers & Nienhaus, 1-4p; The Skylark Brothers, 4-8p

T'was the night before Covid. Friday, April 13th at the Governor French Gallery. Jacque Davis "Dreaming in Color" Textile Arts Exhibition Opening Reception. Still on display. You can see it through the windows but you can't come in.
Sponsored and curated by Gesso Magazine. ... See MoreSee Less

National Blues Museum (StL) – Al Fresco at The MX with Sisters Magnolia and The Weeds; Starting Friday afternoon, 6th Street between Washington and Locust, next to Pi, will be converted to Downtown’s premier outdoor dining experience - no cars allowed. Everyone is invited to purchase food, wine, and drinks from their favorite downtown restaurant, sit outside for sunset dining, and listen to live music from the National Blues Museum. Additionally, MX Movies will be playing Classic Comedies on the MX Movie’s Bar Projection Screen for some extended fun; 5-8p