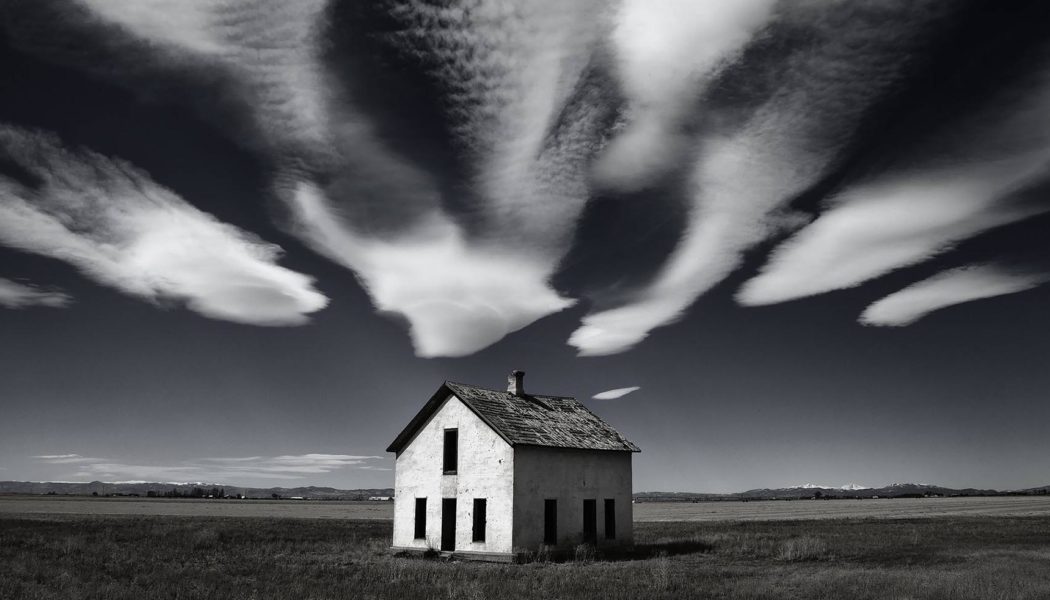 Despite having no formal training beyond high school art class, Josh Rowan has become one of the most talented and in-demand tattoo artists in the St. Louis area.  He has taught himself how to use Photoshop, won an international digital art award, and has become one of the coolest and most successful illustrators/graphic designers in the Midwest.  As if that’s not enough, he taught himself photography at the same time and is now selling books of his spectacular shots from all around the country.  Not bad for a kid from Carlyle, Illinois.

I caught up with Josh on the phone recently in his van near Salt Lake City, Utah, where he is on the first leg of a two-month photography expedition to Alaska.  How he became such a successful and diverse artist is a fascinating story of circumstance, hard work, and what can only be called innate talent.  But it all kind of happened by accident.  He went to college to study music and did so until he felt like they had nothing left to teach him.  Then, in September of 1996, some of his friends opened a tattoo shop in Fairview Heights, IL, called Inkwell, and they invited Josh to join them as an apprentice.

Doing tattoos proved to be a great learning experience for all his future artistic endeavors.  “When you do tattoos, you end up working with clients, talking to them about concepts, helping them to visualize abstract images they have in their heads, and in a day’s time you have to flip-flop your brain around a myriad of styles and designs.  There isn’t much difference between that and doing graphic design for a commercial client.  And since the work is so unforgiving, it forces you to learn a little bit quicker.”

When Inkwell started, tattoo art was still more of an underground thing.  “There was probably one-tenth the number of people doing tattoos as there is today.”  In those days, customers often relied on tattoo “flash,” poster boards of designs that hung in every shop.  Much of this flash was dated, designs from the 70’s and 80’s.  Seeing the need for more modern designs, Josh started producing and selling flash art to other shops.

“I was selling sets of flash on eBay and learning that there was a market, which led to travel.  I’d drive to Nashville or Denver, and go around to all the tattoo shops to show our work and sell it, and that would usually give me enough money to stay on the road for a few weeks at a time, taking pictures and exploring, which I really enjoyed.”

Eventually, Josh landed a distribution deal with Bullseye, which helped spread his work even further.  “At one time, and this is no exaggeration, my tattoo designs were in more than 50% of the tattoo shops in America.  But eventually, as tattoo art became more popular and there were TV shows about it and photos all over the internet, the market for flash really declined.”

A side effect of doing tattoos was that it prompted Josh to learn photography.  “You have to take pictures of your work, and I just couldn’t figure it out—this was pre-digital.  I realized I had to learn how cameras work, so I’d walk around all day with a notepad, taking pictures and writing down the settings I used, and that’s how I learned about aperture and shutter speed and exposure.”

Making flash also led Josh to an interest in digital illustration, another learning challenge for him to tackle.  “I said to myself, I do not understand how people are making cool, smooth graphics with a computer, so I threw myself headlong into learning it.  After two years of that, I ended up winning an international award and got a show of my work at the LA Center for Digital Arts.”

As all this was happening, his interest in doing tattoos on people started to decline.  “When someone gets a tattoo on their body, it’s really their art.  You’re just kind of an implement to help them produce it.”  So as Josh became interested in doing art that was more permanent and that more people could see, he focused increasingly on his graphic design work.  He went into business with another tattoo artist to create a short-lived clothing brand called MATW (Me Against The World) which led to one of his biggest breaks.

The owner of upstart local brewery 4Hands contacted his business partner to see if he was interested in doing design work for them.  “They decided to look for someone local, and someone with a tattoo background, to tap into that culture, because tattoo artists see all walks of life—everyone from judges to librarians to teachers to drug dealers.  So it’s a good way to reach a wide spectrum of people.”  Josh’s business partner wasn’t interested in the job, but told them they should talk to Josh.  So they did, and the rest is history.

“For the last 7 or 8 years, I’ve done over 150 labels.  95% of what you see from that company was filtered through me.  I’ve gotten a lot of fulfillment out of that.  If you want a lot of people to see your work, this does that much more than gallery shows.”

Next time you crack open a 4Hands brew, take some time to marvel at the can, if you haven’t already.  Every can is a little work of art!  Styles range from Mexican Day of the Dead figures, steampunk contraptions, circus freak show posters, 19th century etchings, B horror movies, underground comics, and everything in between.  A veritable moving gallery!

Success has a downside, of course.  “4Hands grew and really dominated my time; and whenever I do something that takes that much of my energy, my brain ends up swinging 180 degrees to something else.   I was held captive and wasn’t able to travel, so all I wanted to do was go on the road and take pictures.”  He had trouble justifying that urge—until he met local artist Libby Reuter.

They launched a collaborative project called Watershed Cairns, which involved building and photographing glass cairns (carefully balanced stacks of vases, wine glasses, plates, beakers, etc.) in interesting settings in the natural world (on the shore of a rocky stream, in a cave, in front of an active forest fire).  “Since I had dedicated myself to doing the project with her, that made it easier to justify going out and travelling to do that.  It also helped me refine my photography skills.  When we took that project on the road, along the whole length of the Missouri River, for example, that forced me to learn to set up quickly, scout a location, find a good composition, get the shot, and move on.”  Visit WatershedCairns.com to see the results of this productive collaboration.  It’s brilliant environmental work, reminiscent of Andy Goldsworthy’s ephemeral sculptures of sticks and leaves, or Christo’s visionary but temporary landscape artworks like Running Fence.

Josh was in a talkative mood, since he had already been on the road for days, barely speaking to anyone.  “After about three days, I notice a change happening in me.  I’ll spend a little longer talking to the guy at the gas station, something I normally wouldn’t do, just because it’s nice to talk to people again.”  He seemed to enjoy telling the story of his career, something I gathered he hadn’t really done before.

And that takes us to today where we find Josh in his happy place: In his van, out in the vast American West, taking pictures (and doing paid work for 4Hands from the road).  In the past few years, he has traveled from Newfoundland to the US/Mexico border, from Iceland to the Salton Sea in California, from Lake Superior to the Dominican Republic, documenting the diverse landscapes with that incredible artistic eye of his.

It’s that incredible eye of Josh’s that made me decide to contact him.  I consider myself a decent photographer; I’ve probably had 10 different cameras, each better than the last, and as a film teacher, I understand camera technology as well as the design principles you need to do good work.  I travel a lot too, and spend lots of time shooting and editing my photos (which have often appeared in Gesso Magazine).  Yet, when I see Josh’s work, I’m absolutely humbled.  Even when I’ve shot in the same locations he does, his images are on a level all their own.  Every single one I’ve seen is absolutely transcendent and magical.  How one person with a camera can get such better shots than everyone else is a great mystery to me.  So how does he do it?  What makes a good picture?

“Composition is always #1,” he explains.

“But you didn’t go to art school,” I object.  “So how do you know when you have a good composition?  Do you use the Rule of Thirds, the Golden Ratio, what?”

Josh laughs.  “I learned something while tattooing and talking to customers about designs.  Some people just don’t have the capacity to visualize an abstract image.  For people like that, people who need something to help them, the rule of thirds is great. But the rules actually messed me up for awhile.”

“So how do you do it then?” I ask, genuinely perplexed.

Josh hesitates, and finally starts somewhat apologetically.  “I’ll try to explain, but this is going to sound very esoteric, and I know some people won’t understand.  But there is something that goes on inside of me.  My mom had this little collection of toys that she had played with as a kid, and I used to play with them.  One of them was a little plastic bubble with a cardboard picture inside with three holes, and little BBs that you would roll around and try to get in the holes.  Today, when I’m taking a picture and composing an image, I experience the same feeling: I move the camera around until all of the elements just drop into place and I know I have it.”

“So how much cropping do you do in post?” I ask.  As every hack photographer knows, it’s really easy to just crop photos on the computer to get a little tighter on your subject or cut out something distracting in the background of the shot.

“I never crop,” Josh says.  “That’s one of my rules.  I don’t want to throw away any pixels by cropping something out.  I want the maximum amount of information in case I want to enlarge the image later.  But also, I try to stay true to the story.”

Check out Josh’s website, JoshuaRowan.com, to see what he means by that.  The way he captures the story of the places he visits is just astonishing.  A colorful aurora borealis reflecting in a mountain lake.  The smoke from forest fires driven by global warming obscuring a Montana mountain, making it look like a ghostly apparition.  A weathered and abandoned homestead on the Kansas prairie framed perfectly by two dead trees.  A toppled gas station roof surrounded by empty desert with a large red TRUMP painted on the side.  The massive steel wall of the US/Mexico border running rigidly across the land like a metallic Running Fence but then just abruptly ending in wide open, undissected desert.

Josh recently released his second book of photography, part of a planned series of fifteen volumes, each of a different location.  You can purchase a copy, or subscribe to receive all fifteen volumes at JoshuaRowanPhotography.com/store.

Buy his work!  We need his eye out there, capturing the magic of the world for the rest of us to see.