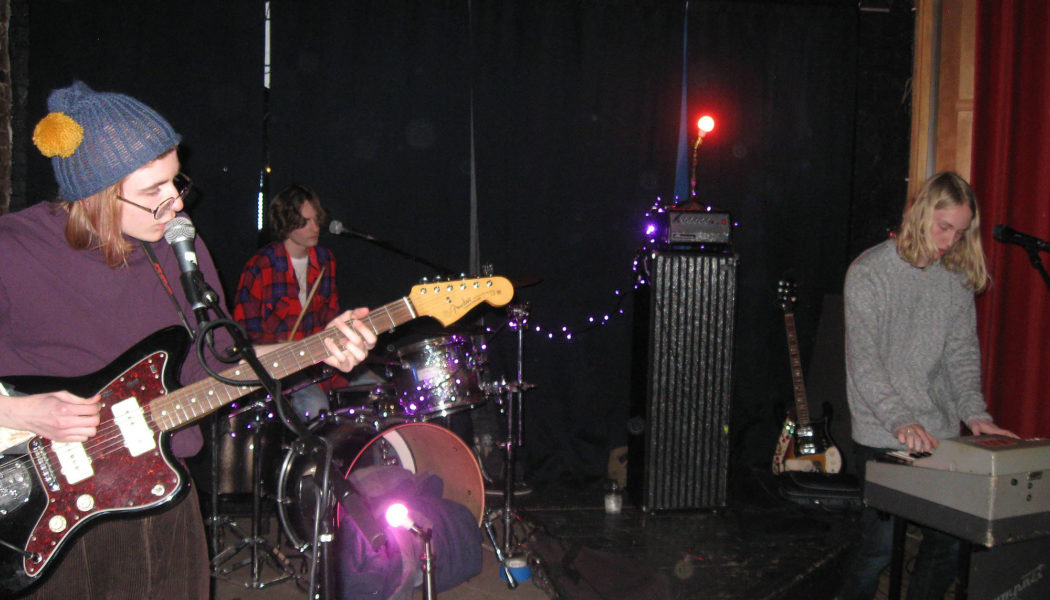 Isobel Abbott-Dethrow sat down with the members of local St. Louis band the Slow Boys, Dylan, Jack, Bill, and Cory in Ballwin, MO, and asked them some questions.

Isobel: How did the Slow Boys form, and how long have you guys been together? I remember seeing you guys play at the Sinkhole in April 2017. Was that your first show, as well?

Jack: Bill and I started playing together in December 2016. … and we were like, “Let’s make a band, dude… We need a name.” Then, the “Slow Boys” just fell right in.

J: Our first show was at Eureka Wine House. That was in February 2017.

B: Yeah, we went camping together and got into some trouble. And we were like, “Hey Cory, you wanna play some songs?” Then, Dylan pulled through; his first show with us was at the album release.

I: What are your major influences?

B: Smashmouth is pretty tight. I like Parquet Courts, DIIV, The Cure, Wire, and Playboi Carti.

I: Are you guys currently in school?

Cory: I go to high school; they go to college.

D: I go to Lindenwood.

I: What’s your go-to venue or house to play at in the St. Louis area?
J: Pete’s house*.

B: Pete’s house is tight.

I: For me, the songs that stand out the most on your debut album are pizza for peace and woah not now/night sweats, mostly for their lyricism. The lyrics are short, but have a ton of meaning and imagery behind them. What is the writing process like?

C: As far as pizza for peace, I was working at a pizza place at the time. I didn’t want pineapple or vegetables on my pizza, and my coworkers started hating on me for it. Then, I tried it, and I did like it. So, it’s just an allegory for what’s going on politically right now. I’m not trying to make too much of a statement; it’s mostly comedic.

J: For woah not now, I was really young, and I had the words from a long time ago. The chorus was not the same; it was something weird. I wrote the chorus differently and thought, “This kind of sucks.” Then, we played it and I thought it was cool. It was also longer.

I: What’s the craziest show you guys ever played?

D: When we played at the Cloud 9 vape shop in Fairview Heights, and a bunch of cops came in while we were playing!

C: When we played with the Buttertones.

B: I was going crazy. So much s#*t happened.

J: Oh, and the mansion house.

C: That was the biggest house I’d ever seen in my life.

J: It was at one of our friend’s grandpa’s, who owns a bank or something.

I: I’ve gained some new friends because of these tiny house shows and concerts you guys have been at. How does it feel creating a sense of community among people who go to your shows?

J: I never thought of it like that; that’s awesome.

C: All you can hope for is bringing people together.

I: Will your next album go in the same direction as your debut, or are you changing things up a bit?

B: We always change things up a bit. We try to diversify as much as possible. There might be some Latin jazz on this one.

I: What does the local scene mean to you guys, and how would you encourage people reading this zine to go to your shows or other St. Louis bands’ shows?

D: It’s cool. It’s my favorite thing; If they don’t do it, they should give it a shot.

B: It’s cool to get younger people involved. There’s so many shows, it’s bulls#*t when they’re 21 and up. This stuff is supposed to be for everybody.

*Pete’s house is also a house venue in Webster Groves.
**Foam is a coffee shop/concert venue on the corner of Cherokee Street and Jefferson Avenue.

It's a Live Music Destination again this weekend:Live Music Row - Belleville🙌 🎶 Here is this week’s lineup!! 🙌🎶Get out there and start “live music rowing it”! ZOOM in if you’re having a hard time reading it or check out our website at livemusicrow.com !We can’t wait to see you hear us! 🎶🎵Notice our new product sponsor Bud Light NEXT. At zero carbs, 80 calories and 4% ABV, Bud Light NEXT is a super crisp light beer! #livemusicrow #bellevillestrong #livemusic #bellevilleil ... See MoreSee Less

St. Louis, prepare yourself for the most immersive experience. PURCHASE TICKETS PURCHASE GIFT CARDS About Beyond Van Gogh 300 Artworks Through the use of cutting-edge projection technology and an orig...
View on Facebook
· Share