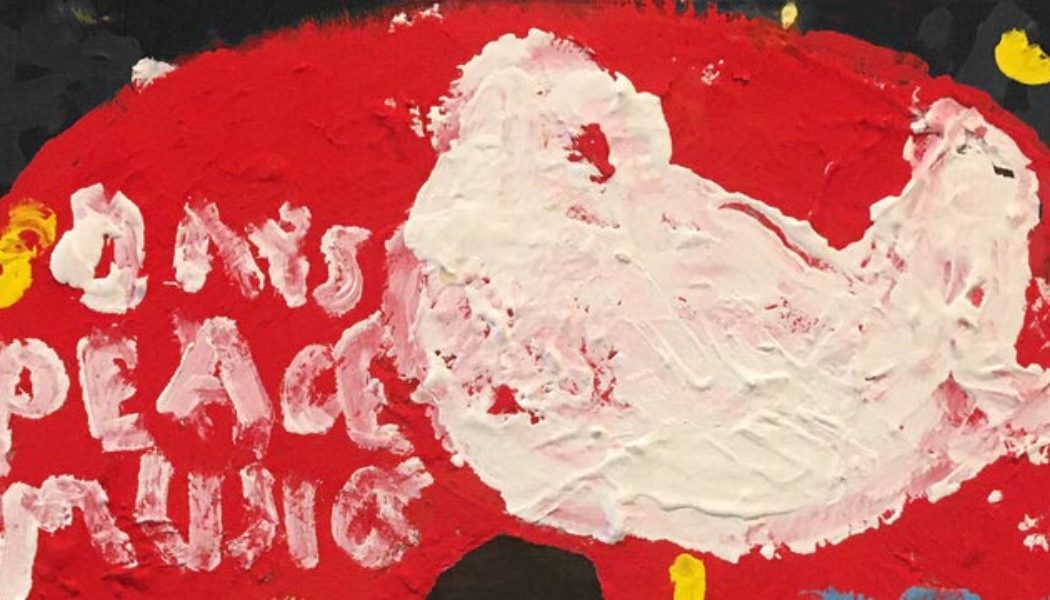 Artist Info/ Bio:
Kerry Smith is a Metro Area art director, graphic designer and painter. His work is exhibited across the United States and Europe. Kerry has also been featured in the international publications of PRINT magazine, HOW, Logo Lounge and 1,000 Dog Portraits. He has worked most of his adult life as a graphic designer (33 years). He has been a curator for 20 years (he is a cofounder of The Gogh-Getters Gallery in the Sacred Grounds Cafe in Edwardsville).

“Off The Record” is a series of Gouache paintings of iconic record label and album art. The center holes are liner notes from the 1960s that often contrast the featured artist. “Off The Record” combines his love for album art, graphic design, and contemporary art; the series was inspired by Beck’s 2015 Grammy Award for best album. The artwork featured on this magazine cover is one of the “Off The Record” series.

Kerry is currently working on an extension of the “Off The Record” series and will introduce the new extension next month.

“Freedom Rider Series” is a series of paintings based on the Civil rights movement of 1961. These can be seen on his Instagram page: @kerrysmith_art

In addition to the current show at Galerie Delphine Courtay in Strasbourg, France, Kerry has had the honor of being a gallery artist in the following galleries: REN Gallery in Los Angeles, Yard Dog Gallery in Austin, Langham Gallery in London, Parlor Gallery in Asbury Park, NJ, 31Art Gallery in St. Louis, Galerie F in Chicago, and Cerbera Gallery in Kansas City.

Kerry’s inspirations: “My Mom, Grandma, Aunt and twin brother, Kevin, are my biggest inspirations. My Mom and Aunt were painters. Grandma was a seamstress and my brother Kevin is a writer. Kevin and I collaborate often and inspire each other to push creative boundaries. And my step brother Mark Niblock-Smith: he was a prominent Los Angeleian who died of AIDS in 1993. He was 35. He has work in MOCA Los Angeles.” MarkNiblockSmith.com (website created by Kerry Smith).

And on the web at KSmithArt.com

A Vision for Talent: The St. Louis Teen Talent Competition

Last call for submissions to Phantasmagoria!
The DEADline is today, get them in while you can! ... See MoreSee Less

Evangeline's Bistro & Music House (StL) – Pianist Jenn Asia will be performing on a beautiful, full-size grand piano outside on the Evangeline’s patio; 7-10p

Midwest Salute to the Arts: 2020 Online Art Fair; Covid may have canceled us on the ground - but not online. 50 of this year’s featured artist are included in this Virtual Art Gallery. Open now on a device near you through September 20th. ... See MoreSee Less